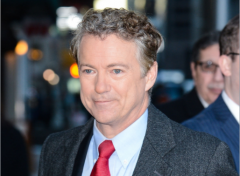 If Senate Majority Leader Mitch McConnell (R-Ky.) is complicit in or votes for the impeachment of President Donald Trump, "it will destroy the Republican Party," said Sen. Rand Paul (R-Ky.), who added that "a third of the Republicans will leave the party."

On FNC's Ingraham Angle, Jan. 15, host Laura Ingraham asked Paul, "Are you surprised that your colleague, Mitch McConnell, at least has left open the possibility that there will be a Senate trial, and when Trump is already in Florida?"

Senator Paul said, "Well, I don't often get asked my advice from leadership [on] how they should react. But my unsolicited suggestion would be this: They will destroy the Republican Party."

"If leadership is complicit with an impeachment or if leadership votes for an impeachment, they would destroy the party," said Paul.  "And like I say, I have opposed President Trump when I thought he was wrong. I've been for him when he was right. We did a lot of good things throughout the Trump presidency."

"And impeachment is purely a partisan thing," he said. "It's for these moral, 'Oh, I'm so much better than you, and you're a bad person because I'm so moral.' These are the kind of people that are going to do this."

Paul continued, "Look, I didn't agree with the [Electoral College] fight that happened last week. I voted against overturning the election. But at the same time, the impeachment is a wrongheaded partisan notion."

"But if Republicans go along with it, it'll destroy the party," he said. "A third of the Republicans will leave the party. I mean, this is why it was a right or wrong debate. Yes--"

"This isn't about, any more about the Electoral College," said the senator. "It's about the future of the party and whether you're going to ostracize and excommunicate President Trump from the party. Well, guess what? Millions of his fans will leave as well."

Ingraham then said, "American voters who supported President Trump will feel that they've been impeached and called a white supremacist, too. Senator, thanks for what you're doing to protect civil liberties. We hope you stay on it."

After the House voted to impeach Trump on one charge last week, Sen. McConnell (R-Ky.) sent a letter to his GOP colleagues stating, “I have not made a final decision on how I will vote [on impeachment] and I intend to listen to the legal arguments when they are presented to the Senate."

In a floor speech on Jan. 19, McConnell said, “The last time the Senate convened, we had just reclaimed the Capitol from violent criminals … the mob was fed lies. They were provoked by the president and other powerful people. And they tried to use fear and violence to stop a specific proceeding … but we pressed on.”

Senator Chuck Schumer (D-N.Y.), the incoming leader of the U.S. Senate, has said, “Make no mistake, there will be an impeachment trial in the United States Senate. ... If the president is convicted, there will be a vote on barring him from running again.”