Rittenhouse's Lawyer: Rifle Was Legal in Wisc., Kyle 'Legally Entitled to Have That Firearm in His Possession' 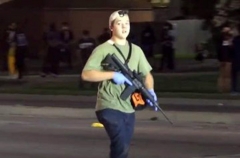 The lawyer for Kyle Rittenhouse, the 17-year-old boy charged with two felony counts of intentional homicide that occurred during a skirmish with radical protesters in Kenosha, Wisc. on Aug. 25, said the young man acted completely in self-defense and that the rifle he had was legal in Wisconsin and "he was legally entitled to have that firearm in his possession."

Despite media claims to the contrary, "it is incorrect" to charge that Kyle Rittenhouse illegally brought a rifle into Wisconsin, said attorney John Pierce on Tucker Carlson Tonight, Aug. 31.

"That firearm never crossed state lines," said Pierce.  "That is a legal firearm in the State of Wisconsin. Wisconsin is an open-carry state. Their charge [by prosecutors] is incorrect as a matter of state law."

"As a 17-year-old, he [Kyle Rittenhouse] was legally entitled to have that firearm in his possession," said Pierce. "Moreover, we're going to be arguing that the Second Amendment and Title 10 Section 246 of United States Code renders that charge in any ordinance, that that charge will be based on blatantly unconstitutional under these circumstances."

Kyle Rittenhouse is knocked on the ground by alleged "protester." (Screenshot, YouTube)

Further discussing the case, host Tucker Carlson said to Pierce, "[W]hat is broadly speaking the defense that you will mount on behalf of Kyle Rittenhouse?"

Pierce replied, "This is 100 percent self-defense, Tucker. Kyle -- he is a good kid. He's a lifeguard. Kenosha was burning down."

"Actually, when he got done with work that day, he went to the high school with some friends to try to remove some graffiti," said Pierce. "After that, they got a call from a local business person who owns three businesses in downtown Kenosha. Two of those three businesses had been burnt to the ground and this business owner simply wanted to desperately protect what was left of his life's work, so he asked for help."

A "protester" apparently hits Kyle Rittenhouse in the head with a skateboard. (Screenshot, YouTube)

Kyle and his friends decided that nobody was doing anything to protect that community and they decided that they wouldn't answer that call and help to protect that business," said the attorney.  "Kyle actually took a First Aid kit downtown because he was concerned that there would be wounded protesters downtown."

"And, in fact, he took a firearm because Kenosha had become a warzone," said Pierce.  "Any sensible person would take that, and him and his friends stayed on the premises and protected that property."

"And then, some events started to unfold whereby he was trying to treat medically wounded protesters," said Pierce,  "and ultimately, he got trapped out on the street out in the open because the riot police had moved the line far enough down that they were between himself and those premises."

One of the persons allegedly shot by Kyle Rittenhouse was also apparently carrying a handgun. (Screenshot, YouTube)

Carlson then asked, "I have read that he brought a firearm as a juvenile, 17, across state lines, a lot of people --"

"That is incorrect," said Pierce.

Carlson responded, "That's incorrect. Tell us where the gun came from."

"As a 17-year-old, he was legally entitled to have that firearm in his possession," said the attorney.

In a statement about his client, Kyle Rittenhouse, John Pierce said, “A 17-year old child should not have to take up arms in America to protect life and property. That is the job of state and local governments. However, those governments have failed, and law-abiding citizens have no choice but to protect their own communities as their forefathers did at Lexington and Concord in 1775.

"Kyle is not a racist or a white supremacist. He is a brave, patriotic, compassionate law-abiding American who loves his country and his community. He did nothing wrong. He defended himself, which is a fundamental right of all Americans given by God and protected by law. He is now in the crosshairs of institutional forces that are much more powerful than him. But he will stand up to them and fight not only for himself, but for all Americans and their beloved Constitution. We will never leave his side until he is victorious in that fight.”