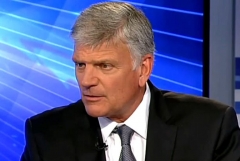 In reference to President Joe Biden's executive order mandating that transgender women (biological males) be allowed to play on real girls' sports teams at public schools and colleges, Rev. Franklin Graham said "this is blatant discrimination against women and girls," and asked where is "the outcry from feminists and women's rights groups"?

In a Feb. 3 post on Facebook, Rev. Graham wrote, "Today is the 35th annual National Girls & Women in Sports Day. Instead of celebrating though, this year there is cause for concern. President Biden has put forth an executive order that would allow biological males who identify as females to participate in women’s sports."

"This is obviously unfair, and will set women’s sports back decades," said Graham. "Women in my generation worked hard for Title IX protection from sex-based discrimination, and we have seen some incredible women athletes emerge through the years."

"This is blatant discrimination against women and girls and is already costing athletic records, championships, scholarships, and more in places where it is allowed," he said. "Chelsea Mitchell of Connecticut says in her high school career she lost 4 state championships, 2 All New England Awards, and countless other opportunities to male athletes who identified as girls, and she says it was heartbreaking."

"Senator Rand Paul questioned President Biden’s nominee for Education Secretary about this important issue today," said Graham.  "Senator Paul said, 'Frankly, some boy who is 6’2” competing against my 5'4" niece doesn’t sound very fair. I think most people in the country think it’s bizarre.' That should resonate with everyone."

"The Bible says that God created them 'male and female," said the Christian minister. "Are we going to be blinded by the foolish agenda of the left? Where is the outcry from feminists and women’s rights groups across this country? Are we not going to have the common sense to protect a level playing field for women in America—our daughters, granddaughters, neighbors, and wives?"

CeCé Telfer (center), a biological male, became the first publicly out trans NCAA track and field champion in 2019, when he competed against real women. . (Screenshot, NCAA)