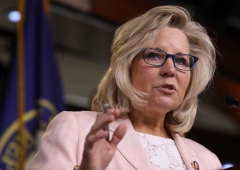 Rep. Liz Cheney (R-Wyo.), the former chair of the House Republican Conference, revealed on Sunday that she no longer opposes "gay marriage," stating that she was "wrong" about her past views on the subject and noted that her lesbian sister affected her decision.

On CBS' 60 Minutes, host Lesley Stahl said to Cheney, "Your sister`s gay. She's married. She has children. And in 2013, you came out against same-sex marriage while your father went the other way. And it was looked upon as courageous when he did that. How do you defend what you did?"

"It's a very personal issue and very personal for my family," said Cheney. "I believe that my dad [Dick Cheney] was right. And my sister and I have had that conversation."

Stahl said, "Wow. I was not expecting that."

Cheney continued,  "This is an issue that we have to recognize, you know, as human beings that we need to work against discrimination of all kinds in our country, in our state."

"We were at an event a few nights ago, and there was a young woman who said she doesn't feel safe sometimes because she's transgender," said Cheney.  "And nobody should feel unsafe. Freedom means freedom for everybody."

Cheney, who is portrayed by the leftist media as a strong conservative, voted to impeach former President Donald Trump over the riotous events of Jan 6, 2021 at the U.S. Capitol.

Her fellow Republicans removed Cheney as chair of the House Republican Conference in May. In July, House Speaker Nancy Pelosi (D-Calif.) appointed Cheney to serve on the House Select Committee on the Jan. 6 Attack. Cheney subsequently was elevated to vice chair of the committee.