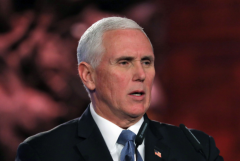 Pence stressed that all men are created equal by God and that "all lives matter."

At the start of the interview, 6ABC's Taff said, "As these things tend to go, a lot of ground to cover and not a whole lot of time in which to cover it. But let's begin here, sir, as you know we are in the midst of a movement in this country. And, I think it's fair to say, in the estimation of those who are marching in the streets across America right now, a movement that is finally getting some traction. And as you know, sir, that movement is fueled by the words 'Black lives matter.'

"And yet, despite that, and the volume with which we're hearing it and the monumental nature of these changes, there are only really a handful of elected Republican leaders in Washington who have uttered those words - 'Black lives matter.' And I wonder, sir, if those are words that you will utter right here, right here today - 'Black lives matter.' Can you say those words?"

Pence replied, "Well, Brian, let me just say that what happened to George Floyd was a tragedy. And in this nation, especially on Juneteenth, we celebrate the fact that from the founding of this nation, we cherish the ideal that all of us are created equal and endowed by our creator with certain inalienable rights. And so all lives matter in a very real sense."(Emphasis added.)

"It's the reason why President Trump in the wake of that tragic event in Minneapolis said that justice would be served," added Pence.  "We've met with law enforcement leaders. We've met with African American leaders."

He continued, "I think the people of Philadelphia can be encouraged by the president's action this week. We're supporting law enforcement. We're not going to defund the police but, rather, we're going to fund new resources to law enforcement to raise the standards for the use of force for de-escalation...."

"We really believe that our steady march on this Juneteenth toward a more perfect union that we have an opportunity," said Pence.  "But it's not a choice between law enforcement and our African American community. This is really a choice between supporting law enforcement and supporting and improving the lives of our African American families and our cities, and we're committed to doing just that."

Taff asked Pence again, "Forgive me for pressing you on this, sir, but I will note you did not say those words,  'Black lives matter.' And there is an important distinction. People are saying, 'of course, all lives matter.' But to say the words is an acknowledgment that Black lives also matter in a time in this country when it appears that there's a segment of our society that doesn't agree. So why will you not say those words?"

Pence explained, "Well, I don't accept the fact, Brian, that there's a segment of American society that disagrees in the preciousness and importance of every human life. ... I couldn't be more proud to be part of an administration that saw the lowest unemployment ever recorded for African Americans. We saw the creation of thousands of opportunity zones that are generating billions of dollars of investment to our cities. This is the administration and President Trump is the president who made permanent funding for historically Black colleges and universities. And we've been champions of educational choice because we believe that inner-city families, African American families ought to be able to choose where their children go to school regardless of their area code and income."

Taff then added, "And yet, one final time, you won't say the words, and we understand your explanation."

A man carries an upside down US Flag with "BLM" written on it as he marched with hundreds more during a Juneteenth protest and march in Boston, Mass. (Photo by JOSEPH PREZIOSO/AFP via Getty Images)

The organization Black Lives Matter, which Taff did not mention, is a radical, left-wing organization that claims its mission is "to to eradicate white supremacy and build local power to intervene in violence inflicted on Black communities by the state and vigilantes."

Black Lives Matter (BLM) says it is a "collective of liberators" who "must move beyond the narrow nationalism that is all too prevalent in Black communities." The radical group is allied with LGBT activists, who are committed to overthrowing the natural order.

As BLM states, "We are self-reflexive and do the work required to dismantle cisgender privilege and uplift Black trans folk, especially Black trans women who continue to be disproportionately impacted by trans-antagonistic violence," states the organization.

"We disrupt the Western-prescribed nuclear family structure requirement by supporting each other as extended families and 'villages' that collectively care for one another, especially our children, to the degree that mothers, parents, and children are comfortable," says Black Lives Matter.

The statue of former British prime minister Winston Churchill is seen defaced, with the words (Churchill) "was a racist" written on it's base in Parliament Square, central London after a demonstration outside the US Embassy, on June 7, 2020. (Getty Images)

"We foster a queer‐affirming network," states the group. "When we gather, we do so with the intention of freeing ourselves from the tight grip of heteronormative thinking, or rather, the belief that all in the world are heterosexual (unless s/he or they disclose otherwise)."

Given the stated radical goals of Black Lives Matter, it is no surprise that the liberal media don't report closely on the group.