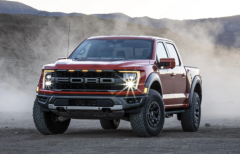 In its latest report on the best-selling cars, trucks, and SUVs of 2021, Car and Driver's top ten are gasoline-fueled vehicles. There is not one electric vehicle (EV) on the list.

Some of the top ten cars and trucks are offered as hybrids (electric and gas), but they currently do not out-sell the traditional, internal-combustion-engine-run cars and trucks.

"The surge of electric car sales is undeniable, but the noise generated by politicians and environmentalists cheering on the battery revolution hides a compelling fact; far from its imminent demise, internal combustion engines (ICE) are going to be around for a long time yet," reported Forbes.

"According to data provider IHS Markit [in October 2020], by 2050 between 60 and 80% of global new car sales will be electric (this comprises battery, plug-in hybrid and fuel cells), but ICE-based cars will still account for 1.9 billion vehicles on the road because of their longevity," reported Forbes. (Emphasis added.)

“It will still be a long road before they (electric vehicles) dislodge gasoline as the predominant fuel in transportation," said IHS Markit Vice-Chairman Daniel Yergin in his book The New Map: Energy, Climate and the Clash of Nations.