Rep. Jordan Calls for Vote on Whether to Remove Pro-Impeachment Liz Cheney as GOP Conference Chair 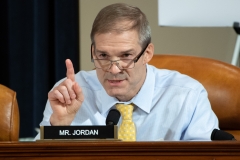 Echoing some of his pro-Trump allies in the U.S. House, Rep. Jim Jordan (R-Ohio), ranking member of the House Judiciary Committee, called for a vote among GOP members on whether Rep. Liz Cheney (R-Wy.) should be removed as chair of the House Republican Conference because of her support for impeaching the president.

“We ought to have a second vote,” Jordan told reporters at the Capitol, according to The Hill. "The conference ought to vote on that."

Jordan is a founding member of the conservative House Freedom Caucus.

House Rep. Matt Rosendale (R-Mont.) issued a statement on Tuesday, calling on Cheney to step down.

"When Representative Cheney came out in favor of impeachment today, she failed to consult with the Conference, failed to abide by the spirit of the rules of the Republican Conference, and ignored the preferences of Republican voters,” said Rosendale.

“She is weakening our conference at a key moment for personal political gain and is unfit to lead," he said. "She must step down as Conference Chair.”

Freedom Caucus Chairman Andy Biggs (R-Ariz.) said that Cheney should not "be the chair of the Republican conference anymore."

On Tuesday, Cheney released a statement that reads,

"On January 6, 2021 a violent mob attacked the United States Capitol to obstruct the process of our democracy and stop the counting of presidential electoral votes. This insurrection caused injury, death and destruction in the most sacred space in our Republic.

"Much more will become clear in coming days and weeks, but what we know now is enough. The President of the United States summoned this mob, assembled the mob, and lit the flame of this attack. Everything that followed was his doing. None of this would have happened without the President. The President could have immediately and forcefully intervened to stop the violence. He did not. There has never been a greater betrayal by a President of the United States of his office and his oath to the Constitution.

"I will vote to impeach the President."

House Democrats introduced one article of impeachment against Trump on Monday and the House is expected to vote on it today, Jan. 13.