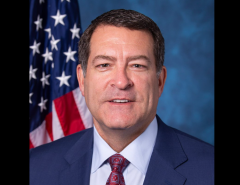 House Rep. Mark Green (R-Fla.), a West Point grad who served in both Afghanistan and Iraq, said it was "upsetting" to see how rapidly President Joe Biden had "capitulated to the Taliban," and stressed that the withdrawal disaster in Afghanistan was entirely Biden's fault, and that every American knows this.

"I anticipate that we're going to see some attempts from them to blame this on Trump, to blame this on someone else," Green told Fox Business Live on Tuesday. "But the truth of the matter is -- and everybody in America knows whose fault this is, it is Joe Biden's."

When asked by host Brian Brenberg about how quickly a Taliban Afghanistan could pose a terrorist threat to the world, Rep. Green said, "This is obviously very upsetting to those of us who served there, to see how rapidly basically President Biden has capitulated to the Taliban."

"During the Trump withdrawal, they actually stopped their withdrawal three times, bombed the Taliban, the Taliban went back into compliance," said Green. "Yet here, we actually refused to do that. Pulled the contractors, pulled the support for these guys. It is incredibly upsetting to see what's going on."

"The terrorist threat, it's absolutely a thousand times exponentially worse, and when you couple that with an open border that this president has created, where we're already capturing tons of people on the terrorist watch list, got two from Yemen just the other day, it is -- Americans are at greater risk because of this president with what is happening in Afghanistan and what's happening at our southern border," he said.

"And right now," added the congressman, "Americans, thousands of Americans are trapped, the greatest hostage crisis in the history of this country created by President Joe Biden."

Brenberg also asked, "Do you have any confidence that the leadership in the Intelligence and Defense communities here can somehow get control and start to right the ship and right the messaging so that we can restore credibility in what the administration is doing?"

Rep. Green replied, "Well, I don't really care much about the credibility of this administration, to be completely honest, I care about the American people who are trapped in Afghanistan. The problem is not in my, you know, limited assessment, as I'm talking to individuals at both State and DoD, I think the DoD was working on the timeline the president gave them. It was the wrong timeline."

"General Milley told him [Biden] don't withdraw, put more troops in, we've got to stabilize the situation," said Green.  "He just totally ignored them, told them to execute the withdrawal. The State [Department] just sat on their hands and did nothing, and they got caught with all these people, they hadn't moved any of them."

"The real tragedy, though, is President Biden tried to paint a falsehood about that by saying the Afghans didn't want to go when there were already 18,000 applications, that's individuals plus 53,000 family members who had been applying for months, and that State Department hadn't moved any of them," said the congressman.

Green, a medical doctor, served as a special operations flight surgeon during his tours in Afghanistan and Iraq. He was awarded the Bronze Star and rose to the rank of Major. He was honorably discharged in 2006, after serving 20 years in the U.S. Army.