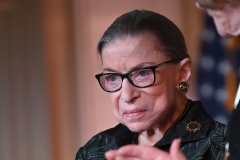 Although President Joe Biden has issued an executive order to establish a commission to examine the "membership and size" of the U.S. Supreme Court, it is worth noting that Associate Justice Ruth Bader Ginsburg (1933-2020), one of the most liberal justices who served on the high court, said in 2019 that packing the court with more judges "would make the court look partisan."

She added that "it was a bad idea when President Franklin Roosevelt tried to pack the court."

In a July 2019 interview with National Public Radio (NPR), Legal Affairs Correspondent Nina Totenberg asked Justice Ginsburg what she was worried about concerning possible changes to the Supreme court.

Ginsburg said, in reference to the number of justices on the court, "There is no fixed number in the Constitution. So, this court has had as few as five and as many as 10. Nine seems to be a good number. It's been that way for a long time."

"I have heard that there are some people, on the Democratic side, who would like to increase the number of judges," she said.

"I think it was a bad idea when President Franklin Roosevelt tried to pack the court," added Ginsburg.

If FDR's plan had been put in place, she said, "the court's number would have swelled immediately from nine to 15, and the president would have six appointments to make."

"If anything would make the court look partisan, it would be that," said Ginsburg, "one side saying, 'When we're in power, we're going to enlarge the number of judges, so we would have more people who would vote the way we want them to.'"

"So, I am not at all in favor of that solution," said Justice Ginsburg.

In a statement following Ginsburg's death on Sept. 18, 2020, Joe Biden said she was a "giant of legal doctrine," and that, "It was my honor to preside over her confirmation hearings, and to strongly support her accession to the Supreme Court."

"In the decades since, she was consistently and reliably the voice that pierced to the heart of every issue, protected the constitutional rights of every American, and never failed in the fierce and unflinching defense of liberty and freedom," said Biden.  "Her opinions, and her dissents, will continue to shape the basis of our law for future generations. May her memory be a blessing to all people who cherish our Constitution and its promise."