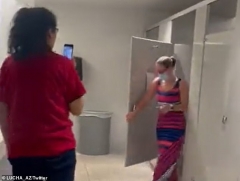 Commenting on the left-wing protesters who followed Sen. Kyrsten Sinema (D-Ariz.) into a bathroom to denounce her opposition to the high price tag of the $3.5 trillion Build Back Better bill, Rabbi Yakkov Menken, managing director of the Coalition for Jewish Values (CJV), compared their actions to Nazi stormtroopers, saying, "you don’t have to go back too far to find German people who acted exactly as these protesters did."

"Early in the Nazi era they [stormtroopers] would go into where people were congregating and shout them down, and make sure no other voices could be heard except the Nazis," said Rabbi Menken.

The Coalition for Jewish Values represents more than 1,500 orthodox, traditional rabbis who advocate for "classical Jewish ideas and standards in matters of American public policy."

Rabbi Menken made his remarks during an Oct. 5 interview on the True Story with Mike Slater, broadcast on thefirsttv.com.  After showing a video of Sen. Sinema being accosted by activists while she used a restroom, Slater asked the rabbi, “What do you think when you see activists like this act the way they act?”

Rabbi Menken said. “It’s incredibly scary. If we lose the ability to distinguish between people rallying and expressing their own voice, and intimidation and bullying and shutting down the voices of others. I mean, you don’t have to go back too far to find German people who acted exactly as these protesters did."

“It’s just so completely inappropriate, walking into a bathroom," he said. "But people shouting down Jews? We don’t have to go back a century to see where that leads."

“To hold a rally, that’s fundamental, that’s First Amendment in America," said the rabbi. "Everybody should have the ability to gather, and express their own opinion, even in a large rally demonstrating huge popular support for whatever opinion it is they want to present."

He continued, “It’s something totally different to shut down the voices of others. The shouting and screaming on college campuses when an Israeli speaks, or when Ben Shapiro speaks – where does that come from?"

"Unfortunately, you go back, like I said, less than a century, you’ve got robust models of this sturmabteilung (storm troopers) shouting down people who opposed the Nazi agenda, and that helped Nazism to spread," said Rabbi Menken. "Because their crazy ideas don’t get rebutted."

Host Mike Slater then asked the rabbi to explain the German word sturmabteilung.

“The sturmabteilung was a Nazi stormtrooper, the Nazi brown shirts," said Menken. "Early in the Nazi era they would go into where people were congregating and shout them down, and make sure no other voices could be heard except the Nazis."

As he was speaking, images of Nazi stormtroopers and Adolf Hitler were shown on-screen.

Senator Sinema is a moderate Democrat, but on some "social" issues, she is very liberal/left. Sinema is the first openly bisexual member of the U.S. Senate and the first woman from Arizona elected to the upper chamber. She is ranked among the top conservative voters in the Democrat caucus.