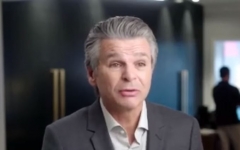 Reverend Franklin Graham, son of the late Pastor Billy Graham, led a Prayer March in the nation's capital on Saturday that was attended by tens of thousands of people. One of the participants in the event was evangelical Pastor Jenetzen Franklin, who also said in a video message that "America will not survive without Christianity.”

Jenetzen is the senior pastor of the multi-site church Free Chapel, based in Gainesville, Ga. He is the author of 16 books, and preaches to thousands of evangelical Christians every Sunday.

In another post from Sunday, Rev. Graham said, "The Bible says, 'Let us then with confidence draw near to the throne of grace, that we may receive mercy and find grace to help in time of need (Hebrews 4:16). Yesterday in Washington, DC, tens of thousands of Christians did just that.

"I’m so grateful for each one who made the effort to come—from all across the country—and to pray that God would help our nation in this time of need," said Graham.  "We confessed our sins and the sins of our country, and we asked that the Lord would help us, heal us, and turn hearts to Him. We prayed for our leaders—Democrat, Republican, and Independent—as Scripture instructs."

"And we are incredibly thankful that Vice President Mike Pence and Second Lady Karen Pence joined us at the Lincoln Memorial so that we could pray for them in person," said Graham.  "It is my hope that even though the March is over, the focus on prayer has just begun.  I hope we have been revived and reminded of the need for prayer and the power in prayer."