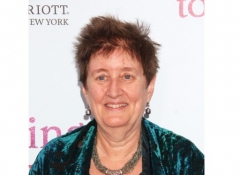 Katha Pollitt, a long-time essayist and columnist for The Nation, a left-wing publication, said that Tara Reade's sexual assault allegation against likely Democratic presidential nominee Joe Biden was not credible and, even if it were, people need to support Biden to get the disastrous Trump out of the White House.

Pollitt even said she "would vote for Joe Biden if he boiled babies and ate them."

In her May 20 article, "We should Take Women's Accusations Seriously. But Tara Reade's Fall Short," Pollitt writes, "I would vote for Joe Biden if he boiled babies and ate them. He wasn’t my candidate, but taking back the White House is that important."

"Four more years of Trump will replace what remains of our democracy with unchecked rule by kleptocrats, fascists, religious fanatics, gun nuts, and know-nothings," says Pollitt.

"The environment?" she adds, "Education? Public health? The rights of voters, workers, immigrants, people of color, and yes, women? Forget them. And not just for the next four years: A Trump victory will lock down the courts for decades."

"I cannot believe that a rational person can grasp the disaster that is Donald Trump and withhold their support from Biden because of Tara Reade," writes Pollitt.

Pollitt then goes on at great length explaining why she does not believe Tara Reade's accusation.

For the record, Pollitt in 2018 wrote that Christine Blasey Ford's completely unsubstantiated claim against Supreme Court nominee Brett Kavanaugh was a "credible allegation."  The subtitle to her article reads, "Christine Blasey Ford has come forward with highly credible allegations of sexual assault that deserve a full airing and much reflection."

Christine Blasey Ford, who claimed in 2018 that Supreme Court nominee Brett Kavanaugh sexually assaulted her when they were in high school, an allegation that was not substantiated. (Getty Images)

In a Sept. 27, 2018 tweet, describing Blasey Ford's testimony before the Senate Judiciary Committee, Pollitt wrote, "She is so brave."

Near the end of her piece on Tara Reade and Joe Biden, Pollitt says, " Whether or not you believe Tara Reade -- and I’m betting that the case for believing her is going to get weaker rather than stronger as the weeks go by -- you should vote for Joe Biden if he is the nominee. And he is almost sure to be the nominee, despite the best efforts of some Sanders supporters to use Reade to force Biden to step aside."

"Moreover, there is nothing hypocritical about feminists supporting Biden," writes Pollitt.  "We have a perfect right to support the candidate who will be better for women and their rights than the one who will send us back to the 1950s. It is the only intelligent thing to do."