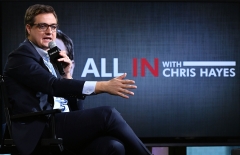 Not unlike disgraced ex-FBI official Peter Strzok, who said he could "smell the Trump support" at a Southern Virginia Walmart, MSNBC's Chris Hayes let his left-wing Ivy League arrogance show by describing the Trump political base as "white men without a four-year degree" and just enough extra income "to buy a boat."

Late on Sunday evening, Weigel, who earned a journalism degree from Northwestern University, tweeted, "I keep trying to make this point but don’t want to be patronizing. The Florida man with a HS degree and a pile of disposable income really is a perfect Trump supporter."

MSNBC's Chris Hayes, who attended the prestigious Hunter College High School and earned a philosophy degree from Brown University, replied, "correct: white men without a four-year degree, and disposable income enough to buy a boat are genuinely the Trump base."

In other words, the typical Trump supporter, voter is a white guy who didn't go to college but can afford to take his boat out on the weekends.

Back in March, the philosopher Hayes described American voters and the two major political parties. "White people in America have two parties to choose from, and between those two parties, they sort in all kinds of ways."

"So people that are college, post-graduate atheists who live in metro areas, like, those are Democrats," he said, "and people that are rural and go to church every week and were high school graduates, most likely Republican."

But “for black voters in those two categories, they’re both going to be in the Democratic Party because there’s only one party they can be a part of because of the nature of structural white supremacy in America in the political coalitions.”

Hayes apparently is not familiar with the history of the Democrat Party, slavery, the Confederacy, the KKK, Jim Crow and segregation.