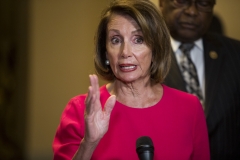 House Speaker Nancy Pelosi (D-Calif.) has been in Congress for more than 30 years and yet, during this time, she apparently never called for the removal of Confederate statues from the U.S. Capitol. But she did on Wednesday, which prompted conservative talk radio host Mark Levin to ask why she didn't do it when Harry Reid (D-Nev.) or former KKK member Robert Byrd (D-W.Va.) ran the Senate.

On Wednesday, June 10, Pelosi sent a letter to the Joint Committee on the Library, which oversees the statues in the Capitol. There are 11 statues of Confederate figures in the Capitol's Statuary Hall.

“As I have said before, the halls of Congress are the very heart of our democracy," wrote Pelosi. "The statues in the Capitol should embody our highest ideals as Americans, expressing who we are and who we aspire to be as a nation."

“Monuments to men who advocated cruelty and barbarism to achieve such a plainly racist end are a grotesque affront to these ideals,” said Pelosi. “Their statues pay homage to hate, not heritage. They must be removed.”

In response to the suddenly "woke" Pelosi, Mark Levin tweeted on June 11, "Pelosi has been in Congress for decades and only today does she demand the removal of 11 confederate statues.  Why wasn’t she offended for the prior 30 years?"

In a second tweet Levin said, "Why didn’t she do anything when Harry Reid ran the Senate or when former klansman Robert Byrd was the Democrats’ leader?"

Robert Byrd (D-W.Va.), who served in the Senate for 51-plus years (1959-2010), was a recruiter for the KKK as a young man and eventually was elected Grand Cyclops in the racist, paramilitary arm of the Democrat Party.

In later years, Byrd left the organization and, in 1993, said joining the Ku Klux Klan was his "biggest mistake."

“While I believe it is imperative that we never forget our history lest we repeat it, I also believe that there is no room for celebrating the violent bigotry of the men of the Confederacy in the hallowed halls of the United States Capitol or in places of honor across the country," said Pelosi on June 10, as reported by Politico. "Let us lead by example.”