Lt. Gen. Michael Flynn, who served in both the Obama and Trump administrations, and who was pardoned by President Trump last week, said he does not believe this country will accept Joe Biden as president come January because of alleged fraud in the 2020 election.

"And if we don't correct what it is that's happening right now, and over the next couple of weeks," he said, "then I really hate to even think about what will happen in our country going forward into the latter part of December and certainly into the next month."

"I do not believe for a second that the country will accept Vice President Biden as the next president, based on what we know to be probably the greatest fraud that our country has ever experienced in our history," said Flynn, who was the Director of National Intelligence in the Obama administration (2012-2014).

Flynn, who was a National Security Adviser to the Trump campaign in early 2017, was swept up in the FBI's spying operation against Trump, based on the Russia collusion" hoax, and was charged with one count of lying to the FBI.

He pleaded guilty but later changed his plea, claiming entrapment by the FBI, as well as "the government’s bad faith, vindictiveness, and breach of the plea agreement."

In May 2020, the Department of Justice said it was dropping all charges against Flynn. However, federal Judge Emmet Sullivan refused to accept the DOJ's position. In June 2020, the D.C. Circuit Court of Appeals ordered Judge Sullivan to dismiss the case; Sullivan refused. The case was "on hold" until President Trump pardoned Lt. Gen. Flynn on Nov. 25, 2020. 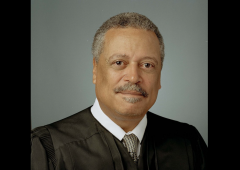 In a statement about the pardon, Flynn said, "By Almighty God’s grace and with the love and courage of my wife Lori, the strength and fortitude of our families, and the inspiration of our friends and every single patriot who circled me with their prayers, wisdom, and kindness, I say thank you from the bottom of my heart. For the first time in more than four years and because of my fearless attorney, Sidney Powell, the Guardian Angel of American Justice, and thousands of good people with endless energy rallying together on my behalf, I breathe freedom and liberty today."

"Never again should any family or individual be so viciously targeted, maligned, smeared, and threatened such has been the experience of my family and I," said Flynn. "Not you and your loved ones, not me nor President Trump, our First Lady, and the Trump children. Stand with me today in renouncing this betrayal of trust that has burdened our nation and proclaim with one united voice across this land that we will never again allow the rightful power of the citizens of this country to be uprooted, undercut, usurped, or held hostage by a coup against our nation, a duly elected President or any future president of these United States."