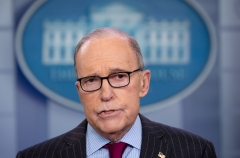 Commenting on the latest data from White House health officials tracking the coronavirus pandemic, U.S. National Economic Council Director Larry Kudlow said "there is no second wave coming," and added that, "all in all ... it's a pretty good situation."

"Actually, I think nationwide, the positivity rate [for COVID-19] is still quite low, well under 10%," said Kudlow.  "Now, I do agree, the numbers quoted to me by the health people — I’m not the expert, they are — over the weekend, there are 37 states that have virtually no problems. There are 13 states that do have hotspots. By the way, part of that is massive new testing. We’re running 500,000 tests per day, so you’re going to pick up some.”

Kudlow then mentioned some of the good health news. “Colorado [new cases] down 30%," he said, and "here in the Washington, D.C. metro area down 31%, Illinois down 36, Massachusetts down 27, Michigan -- this is really something -- they're down 80% on case rates."

"So, you know, there are some hotspots," he said. "We’re on it. We know how to deal with this stuff now. It’s come a long way since last winter, and there is no second wave coming. It’s just, you know, hot spots."

“[A]ll in all, I think it’s a pretty good situation," said Kudlow.  "And, of course, reopening the economy is the key to economic growth. And we've had a lot of green shoots showing recovery coming on faster than a lot of people thought."