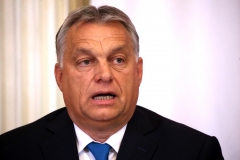 The pro-family, pro-Christian government of Hungary, headed by Prime Minister Viktor Orban, passed a law on Tuesday that says a child's sex is determined at birth; that children have a right to grow up in a culture with Christian values; and that homosexual couples are prohibited from adopting children.

Only married couples -- one man and one woman -- are allowed to adopt children in Hungary because every child has a natural right to a real mother and father under the new law. Single people who want to adopt must have their requests approved by Hungary's office of family affairs, which supports the traditional family model, reported NBC News.

"Hungary protects children’s right to identify as the sex they were born with, and ensures their upbringing based on our national self-identification and Christian culture,” states the law.

In addition, "Hungary protects the institution of marriage, which is based on a consensual union between a woman and a man, and protects the family as the basis on which the nation can survive. The basis of relationships within a family is marriage, as well as the relationship between parents and children. The father is a man, the mother is a woman."

Justice Minister Judit Varga said, "The main rule is that only married couples can adopt a child, that is, a man and a woman who are married," as reported by the BBC.

In Hungary, homosexual behavior is legal and gays may enter into registered partnerships. But they cannot marry. The age of consent is 14. Gays may serve in the military but not transgender people. Surrogacy and IVF is prohibited to gay male and lesbian couples.

Catholicism is the dominant religion in Hungary. The Catholic Church opposes same-sex marriage and condemns adoption of children by homosexuals.