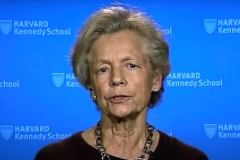 Harvard Law Prof. Elizabeth Bartholet, who runs the Child Advocacy Program at the university, says that homeschooling poses "real dangers to children and to society," that many of the parents "look to the Bible" instead of science for understanding the world, and that homeschooling should be prohibited except in rare, unique cases.

“The issue is, do we think that parents should have 24/7, essentially authoritarian control over their children from ages zero to 18? I think that’s dangerous,” Bartholet says. “I think it’s always dangerous to put powerful people in charge of the powerless, and to give the powerful ones total authority.”

Bartholet's views are detailed in an article she wrote for the Arizona Law Review and summarized in a Harvard Magazine article, "The Risks of Homeschooling."

In the summary of her 80-page article in the Arizona Law Review, it states, "This Article describes the rapidly growing homeschooling phenomenon and the threat it poses to children and society.

"Homeschooling activists have in recent decades largely succeeded in their deregulation campaign, overwhelming legislators with aggressive advocacy. As a result, parents can now keep their children at home in the name of homeschooling free from any real scrutiny as to whether or how they are educating their children.

"Many promote racial segregation and female subservience. Many question science.

"Abusive parents can keep their children at home free from the risk that teachers will report them to child protection services. Some homeschool precisely for this reason. This Article calls for a radical transformation in the homeschooling regime and a related rethinking of child rights.

"It recommends a presumptive ban on homeschooling, with the burden on parents to demonstrate justification for permission to homeschool."

The Harvard Magazine article on Bartholet's hyper-regulatory plan says that about 3% to 4% of U.S. children are homeschooled. It also notes the point frequently made by Bartholet about how teachers are often the first ones to alert Child Protective Services about potential abuse in the home.

However, neither article mentions "that 15 percent of all students have experienced some kind of sexual misconduct by a teacher between kindergarten and 12th grade," according to Hofstra University Prof. Charol Shakeshaft, as reported by the Catholic League.  "The behaviors range from touching to forced penetration." The researchers "also found that up to 5 percent of teachers sexually abuse children."

The Catholic League, citing an investigation by the Associated Press, has also reported, "In its first installment on this issue, the AP called sexual abuse by public school teachers ‘a widespread problem.’ The news wire service, which spent seven months gathering information, pulled no punches: ‘Students in America’s schools are groped. They’re raped. They’re pursued, seduced and think they’re in love. An Associated Press investigation found more than 2,500 cases over five years in which educators were punished for actions from bizarre to sadistic.’"

Nonetheless, it is "this homeschooling regime [that] poses real dangers to children and to society," according to Harvard Prof. Bartholet. Children are "at serious risk for ongoing abuse and neglect in the isolated families that constitute a significant part of the homeschooling world."

"Many homeschooled children miss out on exposure to others with different experiences and values," says the professor.  "Most all miss out on extracurricular activities like student government. A very large proportion of homeschooling parents are ideologically committed to isolating their children from the majority culture and indoctrinating them in views and values that are in serious conflict with that culture."

She continues, "Some believe that women should be subservient to men; others believe that race stamps some people as inferior to others. Many don’t believe in the scientific method, looking to the Bible instead as their source for understanding the world."

In concluding her lengthy article, Bartholet advises, "States should impose significant restrictions on homeschooling. Legislatures should do this on their own initiative. But courts must make clear that the current regime violates children’s constitutional rights, and that restrictions along the lines described below are required.

"The new regime should deny the right to homeschool, subject to carefully delineated exceptions for situations in which homeschooling is needed and appropriate. Parents should have a significant burden of justification for a requested exception."

In other words, the State, the government must control the education of children, not the parents.