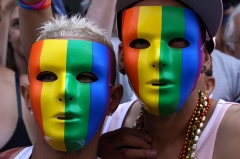 Family Research Council President Tony Perkins rebuked the Republican National Committee (RNC) and its chairwoman, Ronna McDaniel, for forming a "Pride Coalition" with the LGBT Log Cabin Republicans on Saturday, stating that the LGBT agenda is "incompatible with religious freedom and parental rights."

If the Republican Party continues down this path, warned Perkins, it will "become a Democrat-lite party," and lose votes from Christians and social conservatives. He added that McDaniel apparently took this step "on her own," without consulting with some RNC leaders, and "she needs to step down."

The new RNC Pride Coalition was announced at Mar-a-Lago on Nov. 6, where the Log Cabin Republicans held a gala and honored certain individuals, including Ronna McDaniel and former first lady Melania Trump.

"Conservatives in Log Cabin don’t just share our vision for a free, secure and prosperous America — they enrich it by adding unique perspectives to our party and recruiting even more diverse candidates and supporters to join our cause," said McDaniel at the event, where she was given the "Majority Maker" award.

"The RNC is launching our first-ever RNC Pride Coalition," she said, which will "work alongside our other coalition groups to invest in communities and mobilize support for the upcoming midterms."

Speaking with the host of The Todd Starnes Show! on Wednesday, Nov. 10, Tony Perkins said, "The leadership of the RNC is moving the party in a direction that is incompatible with religious freedom, and many of the things that we see parents fighting for across the country. … As you move to be quote/unquote inclusive with those that have radical ideas on human sexuality, which are hostile to religious freedom, the Republican Party becomes just Democrat-lite."

He noted that McDaniel had posted a tweet in June celebrating gay pride month. "Well, obviously that’s problematic," said Perkins.  "That agenda is incompatible with religious freedom and parental rights. … You cannot separate the ideology from the policy implications.”

He stressed that the goal of LGBT Republicans is "to change the Republican Party platform," so that it embraces and supports the anti-Christian and anti-family policies of the left.

I am incredibly honored to receive the @LogCabinGOP 2021 Majority Maker Award!

“If the Republicans get this wrong, they become a Democrat-lite party, and I think they begin to lose immensely because when you look at the fact that the Republicans disproportionately get their support from social conservatives," said Perkins, "they have to be mindful of that and they have to continue to advance a values platform that is consistent with the traditional values that made America great.”

As for the RNC, the group "is really not as effective as it was when Rence Priebus was the chairman," said Perkins. "They’re now embracing this agenda that is hostile to a large portion of their constituency. One thing I’ve told people, Todd, do not send your money to the RNC."

“There’s a lot of RNC members in leadership positions that are upset about this because they were not told" about the pride coalition decision, he said. "This is something that Ronna [McDaniel] did on her own."

"Quite frankly, I think it’s time for her to take up something else and leave the party to those who I think can chart a path forward, restore what has been lost, and make sure that the Republicans, the conservatives, regain the majority in Congress and continue to see victories and gains across the nation," said the FRC president.

“I think she needs to step down," said Perkins. "I think she has outlived her purpose at the RNC."

In a Nov. 9 commentary about the topic, Perkins wrote, "History shows that statements like this" pride coalition "have laid the groundwork for sweeping change. And while people at the Log Cabin Republicans or RNC may not have that intention, it will almost certainly be the outcome if more conservatives don't stand up and remind Republican leaders that we already have one Democratic Party. We don't need two."

Using people for their identity is what the Democrats do, not Republicans.

This actually hurts the Log Cabin Republicans by grifting their fundraising & weakens their effectiveness.

And don’t forget, @GOPChairwoman the rainbow is God’s sign.https://t.co/MRFN709sS4

House Rep. Marjorie Taylor Greene (R-Ga.) also criticized the RNC "Pride Coalition." On Nov. 10 she tweeted, "Using people for their identity is what the Democrats do, not Republicans. This actually hurts the Log Cabin Republicans by grifting their fundraising & weakens their effectiveness. And don’t forget, @GOPChairwoman the rainbow is God’s sign."

Conservative commentator Matt Walsh, who has 725,000 followers on Twitter, tweeted on Nov. 8, "Trump hosted and attended an event over the weekend where the GOP unveiled its new 'RNC Pride Coalition.' If the Republican Party is going to fully embrace leftist sexual identity politics, then it officially serves no purpose."

Trump hosted and attended an event over the weekend where the GOP unveiled its new "RNC Pride Coalition." If the Republican Party is going to fully embrace leftist sexual identity politics, then it officially serves no purpose.

Responding to gay Republican Richard Grenell, a former top Trump administration official who attended the Log Cabin gala, Walsh tweeted, "I’m not going to ask permission privately before stating my opinion. I think 'gay pride' is leftist sexual identity politics bulls**t and has no place in any conservatism I recognize. It also won’t succeed in attracting the voters you’re going after. But don’t let that stop you."

At the gala, Grenell gleefully denounced conservative Pat Buchanan and his 1992 culture war speech at the Republican National Convention.