Fmr. UK Commander in Afghanistan: Biden 'Should Be Court-Martialed For Betraying' U.S. and U.S. Armed Forces 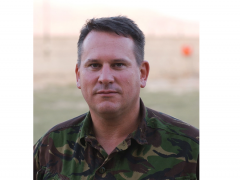 In a very candid interview with conservative Mark Levin on Sunday, the former commander of British troops in Afghanistan, Colonel Richard Kemp, said that President Joe Biden had single-handedly destroyed NATO's credibility and had betrayed the United States and the U.S. military, for which he "should be court-martialed."

"In my opinion, and I don't say this lightly, and I've never said it about anybody else, any other leader in this position, people have been talking about impeaching President Biden," said Col. Kemp on FNC's Life, Liberty & Levin.

Colonel Kemp was an infantry battalion commanding officer and he headed Operation Fingal in Afghanistan in 2003. Kemp also served in the Iraq war, the Bosnian war, the Gulf war, and in battles against terrorists in Northern Ireland (Operation Banner).  He was awarded the Commander of the Order of the British Empire and the Queen's Commendation for Bravery.

During the Aug. 22 interview, Levin asked, "Colonel Kemp, my question to you is, given what has taken place now in Afghanistan, and it's ongoing, and assuming that Joe Biden stays on the same course, what are consequences for the United States, Britain, NATO, the free world, and that area of the world now?"

Kemp replied, "I think the consequences of what has just happened and what's still happening are absolutely devastating for the whole of the Western world. I mentioned earlier that the catastrophic effect on NATO. NATO is a very important military alliance."

"Many presidents have criticized it for not pulling its weight, the European member states in particular," said Kemp.  "And they're right to do so. But President Biden has just completely destroyed its credibility, totally destroyed it single-handed. And, you know, we're seeing -- what we face now is a terrorist threat coming out of Afghanistan that is greater than the terrorist threat before 9/11.

Earlier in the interview, Kemp said, "[W]hat we're seeing, and what we have seen in the last few days, is -- it's the greatest foreign policy disaster that I have seen in my lifetime of any nature from any Western country."

Refugees hang on for dear life as they attempt to board a giant Chinook helicopter as it was taking off here following a supply drop to troops fighting along Highway One, some 38 miles northeast of Saigon, Vietnam. (c.1975) (Getty Images)

"And I would go so far as to say that this is the most disastrous foreign policy event since at least the Second World War for the United States of America," said the colonel.

"The American forces have not been destroyed nor have they been defeated on the battlefield," he said.  "But they have been humiliated by their president and the whole of the United States of America, and the Western world has also been humiliated."

As for President Biden's remarks from the White House last week about the slap-dash withdrawal from Afghanistan, Kemp said, "I think I would say that I've never heard such a disgraceful speech from the president of the United States of America as I heard the other day when he -- he said the buck stops with me. But he then went on to explain how the buck actually stopped with everybody else."

"It wasn't him to blame, it was everybody else, starting from President Trump," said Kemp. "And suggesting for one moment that he was bound or was forced to carry out a policy like this because of President Trump's policy is simply laughable, a pitiful excuse for what he did and what he is now being humiliated in.

"Because, you know, he spent much of his early presidency reversing so many other things Trump did. He has been president for seven months. He had a review of the situation in Afghanistan by his staff at the beginning of his presidency.

"And he was presented with various different options, one of which was the withdrawal he has executed. But there were other options. He didn't have to take this option. So it's not President Trump's fault. It's not anyone else's fault. It is the fault of the president of the United States of America.

"And for that man to basically accuse Afghan forces of cowardice -- a man who has never fought himself, I should add -- for him to accuse the Afghans of cowardice I think is a national disgrace for America. The Afghan national security forces have fought and died alongside American soldiers in Afghanistan, and British soldiers.

"And 50,000 of them -- 50,000 of them have been killed in action against the Taliban in the last seven years. That is a phenomenal number. It dwarfs the casualties that we, Britain and America, took, and is about two-thirds of the size of the current British army."