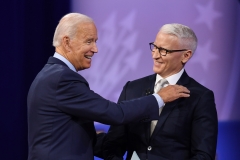 Democratic presidential nominee Joe Biden declared his support for gay "marriage" in 2012, stating "love is love," but just a few short years previous, in 2006, Biden scoffed at the idea of a constitutional amendment to ban gay "marriage" and stressed that, "Marriage is between a man and a woman."

On the June 4, 2006 edition of Meet The Press, then-host Tim Russert said to Biden, "The president [George W. Bush] used his radio address yesterday, and tomorrow in the Rose Garden, to talk about a constitutional amendment to ban gay marriage."

How does any member of the #LGBTQ community watch this and still support #JoeBiden with a straight face (no pun intended)? pic.twitter.com/je6y3Yd8Tx

Then-Sen. Biden (D-Del.) said, "You know, think about this. The world's going to Hades in a handbasket. We are desperately concerned about the circumstance relating to avian flu -- we don't have enough vaccines, we don't have enough police officers -- and we're going to debate, the next three weeks, I'm told, gay marriage, a flag amendment, and God only knows what else.

"I can't believe the American people can't see through this," said Biden. "We already have a law, the Defense of Marriage Act. We've all voted -- not, where I've voted, and others have said, look, marriage is between a man and a woman and states must respect that. Nobody's violated that law, there's been no challenge to that law."

"Why do we need a constitutional amendment?" said Biden.  "Marriage is between a man and a woman. What's the game going on here? And now we're going to also vote, right after that, about desecration of the flag."

Biden then rattled off a list of other issues that he believed were more important to the United States than a Defense of Marriage Act proposal.

He again stressed, "And what are we going to do? Because we don't want to make any hard decisions, let's go talk about gay marriage. I think it's ridiculous."

On May 6, 2012, also on Meet the Press, Biden revealed that he supported homosexual "marriage," stating, “Who do you love? Who do you love? And will you be loyal to the person you love? And that’s what people are finding out is what all marriages, at their root, are about.”

On Aug. 1, 2016, as vice president and at the vice president's Naval Observatory home in Washington, D.C., Biden led the ceremony to "marry" two homosexual men.

The two men, Brian Mosteller and Joe Mahshie were staffers in the Obama-Biden White House. In a tweet that day, Biden, a supposed Catholic, wrote, "Proud to marry Brian and Joe at my house. Couldn't be happier, two longtime White House staffers, two great guys."