DHS's Cuccinelli: 'Made in China' Clothing Means Made by 'Modern-Day Slaves,' The 'New Gulag Archipelago' 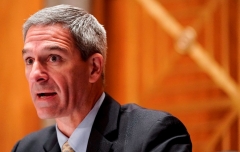 The acting deputy secretary of the Department of Homeland Security, Ken Cuccinelli, is warning Americans that "Made in China" cotton goods, such as blankets, sheets, and clothing, may have been made by Chinese slave labor, "modern-day slaves" in that Communist regime's vast "new gulag archipelago."

Up to three million Ughurs, Kazakhs, and other Muslims are being forcibly detained in an estimated 1,300 internment camps, where they are forced to make essentially "concentration camp souvenirs," cloth products for sale in the global economy, explains Cuccinelli in a Dec. 15 commentary in Newsweek.

A satellite image of one of Communist China's many concentration camps. (Screenshot, BBC)

"As Americans of good conscience, we must stand up and refuse to buy these goods," says Cuccinelli. "The Chinese government needs to immediately close its camps, set its captives free, stop its program of cultural annihilation and end its state-sponsored slavery program."

As explained by the deputy secretary, and well-documented by the media and activists, Communist China has imprisoned the Uyghurs and other ethnic minorities in concentration camps.

"They are being targeted because of their faith, ethnicity and culture, without trials or due process," states Cuccinelli.  "In this new gulag archipelago, Uyghurs face extra-judicial killings, torture, forced ingestion of unidentified drugs, forced sterilization, rape and sexual abuse, forced abortions, forced labor, political indoctrination, and forced renunciation of their faith."

The children of these prisoners, reportedly hundreds of thousands of them, have been shipped off to be raised in orphanges run by the Chinese Communist Party (CCP).

The slave laborers in the new gulag archipelago "are forced to make clothing, towels, sheets, blankets, yarn, thread and other cotton products that find their way to the shelves of American stores," reports Cuccinelli.

"The captives are enslaved to produce the cotton and yarn used in jeans, T-shirts and socks, as well as the cottonseed oil used in food products and paper items," he states. "Outside the camps, Xinjiang has become a vast open-air prison wherein the CCP has dramatically expanded state security and installed a sophisticated surveillance networks."

Prisoners at one of China's "re-education" camps. (Screenshot, Wikipedia)

To combat China's neo-Nazi-like policies, the DHS and Customs and Border Patrol will shortly announce a "Withhold Release Order (WRO) on cotton products made by the Xinjiang Production and Construction Corps (XPCC), a paramilitary organization also known as the Bingtuan, that is the backbone of the CCP's apparatus of control in Xinjiang," says Cuccinelli.

"The WRO applies to all cotton produced by the XPCC and its subordinate and affiliated entities," he adds, "as well as any finished products that are made with that cotton, such as clothing."

Cuccinelli notes that in July 2020, "CBP seized 13 tons of human hair from Xinjiang. Not since the Holocaust have we witnessed hair shorn from concentration camp inmates on this scale, and we have never seen such a widespread and pernicious attempt to monetize these byproducts of depraved evil."

"This holiday season, we call on America's consumers to understand that cheap Chinese goods are not worth the price," says Cuccinelli.  "We must not corrupt American consumers and markets with concentration camp souvenirs."

For American consumers, "look for the warning label," says the deputy secretary.  "That sweater or throw blanket may look like a bargain, but we must remember that someone halfway around the world has already paid a very steep price for it. Is it still 'cheap' if you know it was made on the backs of slaves in CCP labor camps and factories?"

"These are modern-day slaves -- it is as simple as that," says Cuccinelli. "As Americans of good conscience, we must stand up and refuse to buy these goods."

According to The Black Book of Communism (Harvard University Press), more than 65 million people have been killed for political and religious reasons in Communist China since 1950.