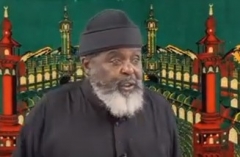 At his house of worship in Washington, D.C., Islamic activist Imam Abdul Alim Musa suggested that Zionists set the bomb that killed U.S. soldiers during the August withdrawal from Afghanistan, and further said that "Zionists control Congress," the economy and America.

Musa made his remarks for a program on his YouTube channel, As-Sabiqun DC, following the Aug. 26 bombing that killed more than 100 people, including 13 U.S. soldiers and 90 Afghanis at the Kabul airport. The Middle East Media Research Institute (MEMRI) was one of the first organizations to report on Musa's comments.

"After a short period of being a Muslim, we had realized who our main enemy was, and we knew from jump street that our main enemy were Zionists," said Musa, as transcribed by MEMRI.  "The main enemy of Islam were Zionists. So therefore, we not only had to go up against the Americans, who were servants of Zionism.

Two women who were wounded in the Aug. 26, 2021 bombing at Kabul airport. (Getty Images)

"'To show you how we feel about it, we gonna blow up a whole crew of your soldiers in front of everybody, and in front of the public. You can't do nothing about it.' Why, they couldn't do nothing about 9/11 right? Don't they have history of people standing on buildings, cheering while 9/11 goes off?  Who are those people? They are Zionists.

"The Zionists are telling us what to do, the Zionists put the big tall guy [James Comey] ... you know, what's his name... head of the FBI. They do what they want. Donald Trump's best friend is a Zionist, they are friends... [but] they are not his friends, right? Don't they manipulate, and they control him? 100%. What was Trump's job? We said it here, years before it happened.

"Why? You see it every day, why. What is it, Pegasus [spyware] this and that... They got something on the whole Congress, and there ain't no white man that lived a moral life in the United States. I mean, there's probably one or so... But them, right? Tell the truth!