Cruz: Critical Race Theory is a 'Lie,' 'Poison Being Poured Into the Minds of Our Kids' 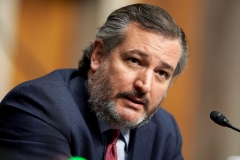 (CNS News) -- Senator Ted Cruz (R-Texas) condemned Critical Race Theory, which is being taught in many public schools and universities, as a left-wing ideology that teaches that America "is fundamentally racist." It is a philosophical "poison" that is "being poured into the minds of our kids," he added.

On FNC's Watters' World, June 26, host Jesse Watters asked Cruz, "So, do you think that this anti-Critical Race Theory kind of mirrors the Tea Party Movement that we saw maybe a little over a decade ago? Because I'm seeing the same type of energy, political potency that I saw during that time period?"

Cruz said, "Now, I think that's exactly right. I think it is waking a lot of people up, and the thing about it is, the people who are realizing that this garbage is being taught in school, many of them are not people who have been politically active in the past."

"They've been living their lives, raising their kids," he said. "And suddenly they're finding out that their local school is teaching them that America is fundamentally racist, that all white people are racists, that every issue we have in America, it is all about us fighting on racial lines that whites and blacks hate each other and have to hate each other."

"And that's all a lie," said Cruz.  "That's all poison and it's being poured into the minds of our kids. And I think a lot of moms, a lot of dads are really ticked off about it."

Watters then said, "You're right. They've been politically activated by this far left indoctrination, and they're not going to take it anymore. And you've now put forth a bill to, I guess, withdraw funding from any of this garbage anywhere in the United States."

Senator Cruz said, "Well, within the Federal government, and so the background there, President Trump issued an executive order that prohibited any federal funds from going to teaching critical race theory, teaching it to our soldiers, our sailors, our airmen, and Marines to teaching it to civilian federal government employees. Because you've had a lot of government agencies, including, unfortunately, the military that bring in these training outfits that teach critical race theory that try to divide people based on race.