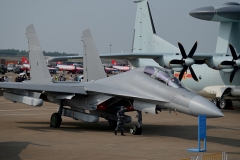 On Sunday, Communist China sent 39 warplanes toward Taiwan, a self-governing island that considers itself independent of China, but which the mainland views as part of its territory.  The 39 planes constituted the largest sortie of the new year, according to the Military Times.

Under the Taiwan Relations Act, the U.S. provides the island with weapons of a "defensive character." The Act permits the U.S. to assist Taiwan should it face threats "that would jeopardize the security, or the social or economic system, of the people on Taiwan."

"The Chinese sortie came as the U.S. military said that two of its carrier strike groups were sailing on Sunday in the South China Sea, led by USS Carl Vinson and USS Abraham Lincoln," reported The Times.  "They engaged in anti-submarine, air and combat readiness operations."

Red China has been flying warplanes toward Taiwan nearly every day since last year.

"No one should underestimate the Chinese people's staunch determination, firm will, and strong ability to defend national sovereignty and territorial integrity," said Xi.

"The historical task of the complete reunification of the motherland must be fulfilled, and will definitely be fulfilled," he added.

Also in October, President Joe Biden said that the U.S. would help Taiwan if it were attacked by China.  "We have a commitment to do that," Biden told CNN.