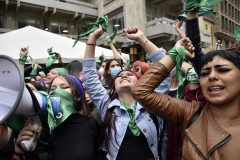 Pro-abortion activists celebrate outside the Justice Palace after the Constitutional Court voted in favor of decriminalizing abortion up to 6 months into pregnancy on February 21, 2022 in Bogota, Colombia. (Getty Images)

The Constitutional Court in Colombia ruled on Monday that abortion will be allowed on demand up through six months of pregnancy, a decision that pro-life activists there described as "savagery."

The court ruled 5-4 to decriminalize abortion, which means that abortions carried out at 24 weeks or earlier in a pregnancy will not be punished as a crime. Abortion  “will only be punishable when it is carried out after the twenty-fourth (24) week of pregnancy," stated the court in a press release on Twitter.

After 24 weeks, abortion will be permitted if there is a "risk to the life of the mother, sexual abuse, or fetal deformity," reported the Catholic News Agency (CNA).   Colombia is a predominantly Catholic nation, with about 73% of the population identifying as Catholic and 14% identifying as Protestant.

Apparently, neither Pope Francis nor any Vatican official issued a statement on the court's ruling.

Pro-life activists hold a sign that reads "I say yes to life" during a protest outside the Justice Palace as the Constitutional Court debates the decriminalization of abortion up to 6 months into pregnancy on February 21, 2022 in Bogota, Colombia. (Getty Images)

United for Life President Jesus Magana told CNA's Spanish-language edition that activists held a "Silence of the Innocents" sit-in outside the courthouse, where they placed hundreds of tiny coffins "representing aborted babies."

Magana also said, “A baby is aborted every seven minutes in Colombia ...."

Magana stressed that "the pro-abortion movement didn’t win, because they wanted the total decriminalization of abortion and the court didn’t give it to them." But, he added, the court ruling allows "babies up to six months to be destroyed, which is savagery."

"There is no middle ground between letting one live or killing," Magana told CNA. "They decided to allow killing up to six months and the Court has opened up the door to the abortion business even more."

Andrea Garzon, a pro-life leader, said, “we have a pro-abortion court that’s not protecting the human rights of Colombians," reported CNA. "We need to keep on fighting, keep defending life. We are going to continue defending the rights of unborn children.”

“This is a lost battle, but we’re winning the war because Christ has already won it in heaven," she said. "We’re not stopping, we are here for both lives. We can’t allow babies to die. We have to continue.”