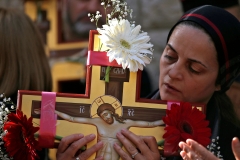 During his trip to Israel last week, President Joe Biden met with Theophilos III, the Greek Orthodox Patriarch of Jerusalem, who alerted him to "unprecedented attacks by Israeli radical groups" against Christians in the Holy City, which is all designed "to create an environment that repels Christians from their own city of Jerusalem," reported the office of the patriarch.

"Patriarch Theophilos III stressed the need for an active American intervention to protect the Christian heritage and presence in the Holy Land, especially in the city of Jerusalem, which is witnessing unprecedented attacks by Israeli radical groups, that conduct their offenses without accountability in order to create an environment that repels Christians from their own city of Jerusalem," stated the patriarch's office.

"His Beatitude also noted attacks on churches, clergy and faithful Christians by members of these groups [Zionist extremists], and their attempts to seize the properties of Jaffa Gate in a case that illustrates the horror and ugliness of the battle waged by these groups against the authentic Christian presence in Jerusalem," said the office. 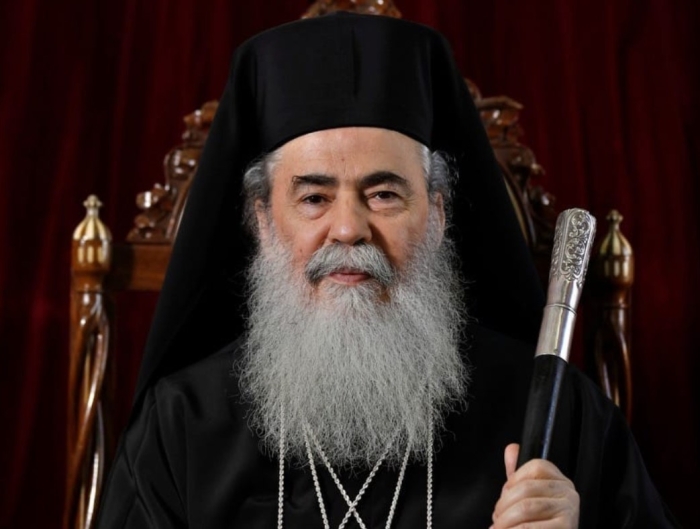 "He also spoke of restricting freedom of worship against Muslims and Christians, preventing believers from reaching their places of worship freely, giving the example of Israeli police practices this year on the Saturday of Holy Fire in which they prevented worshippers from reaching the Church of the Holy Sepulchre," the office reported.

The Church of the Holy Sepulchre dates back to the 4th century and contains the site of Jesus's crucifixion and his tomb -- two of the holiest sites of Christianity.

The Greek Orthodox Patriarch has been fighting in court against the 2004 sale "of leases for two hotels near the Jaffa Gate and a third property in the Christian Quarter," according to the Greek Reporter. 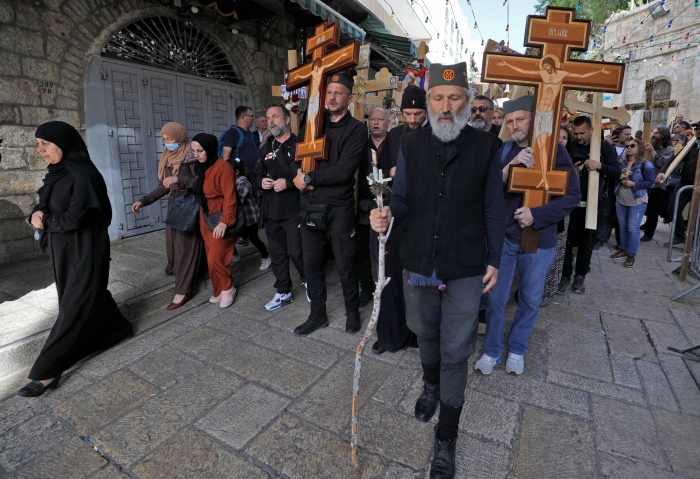 The patriarch lost that case in June and the three buildings now belong to Ateret Cohanim, "a religious-Zionist organization that works to populate the Old City and other East Jerusalem neighborhoods with Jewish residents by purchasing properties from non-Jewish owners," said the Greek Reporter.

The news outlet further reported, "Extremist Jewish activists have for years carried out vandalism attacks against Christian sites in Jerusalem and other areas of Israel, including hate graffiti and arson. The extremists also target Palestinians."

In his meeting with Biden, Patriarch Theophilus III, "also spoke about the challenges facing Christians and the extent to which things have reached, especially in Jerusalem, where churches are attacked, Christian clergy are insulted, and blocking worshipers from accessing places of worship, and attempts to seize Christian real estate at the main entrance to the Church of the Holy Sepulchre and the historic route of Christian pilgrims at Jaffa Gate and New Gate," his office reported. 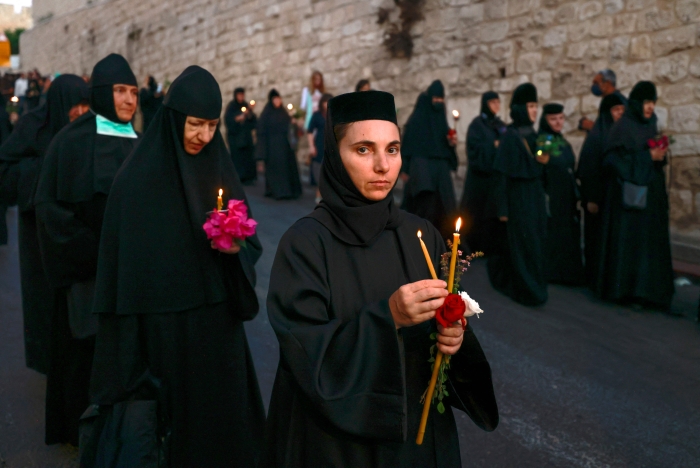 These "Israeli radical groups" must stop their operations, said the office, because they "aim to erase the mosaic culture of the Holy City and eliminate its religious and cultural diversity, adding that the Christian heritage in Jerusalem is at risk as a result of the practices of these groups."

In January 2022, Patriarch Theophilus III wrote in the London Times, “Our churches are threatened by Israeli radical fringe groups. Our brothers and sisters are the victims of hate crimes. Our churches are regularly desecrated and vandalized. Our clergy are subject to frequent intimidation.”

As for the Zionist extremists purchasing property in the Christian Quarter, he said, "Quite disingenuously they claim that their physical presence in there will not affect the integrity of the Christian Quarter. However, we know from their previous actions at St John’s Hostel, a site even closer to the Holy Sepulchre, which was also deceitfully taken over by them some years ago, that this is not true." 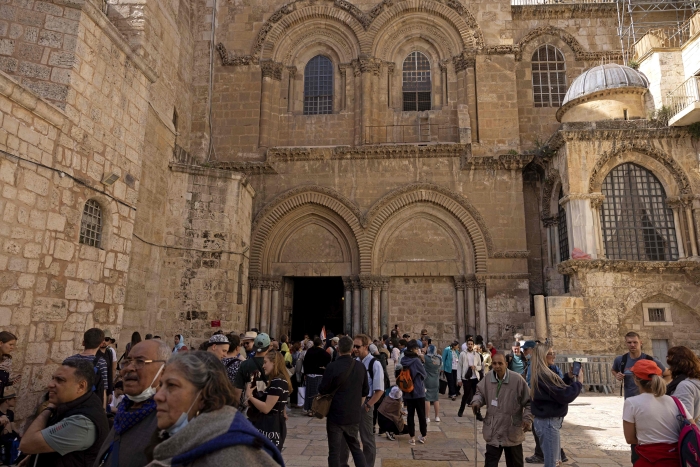 Christian pilgrims visit the Church of the Holy Sepulchre in Jerusalem's Old City during Holy Week, on April 19, 2022. (Getty images)

“Their behaviour will be devastating for all Christians," said the patriarch. "Local families, who have lived here for generations, will be made to feel unwelcome in their own home and pilgrims who have longed to visit the birthplace of the Christian faith will have their experience diminished.”

A joint statement issued by all the Christian churches in Jersualem in December 2021 states, "Throughout the Holy Land, Christians have become the target of frequent and sustained attacks by fringe radical groups. Since 2012 there have been countless incidents of physical and verbal assaults against priests and other clergy, attacks on Christian churches, with holy sites regularly vandalized and desecrated, and ongoing intimidation of local Christians who simply seek to worship freely and go about their daily lives. These tactics are being used by such radical groups in a systematic attempt to drive the Christian community out of Jerusalem and other parts of the Holy Land."

According to Fr. Fracesco Patton, Custos of the Holy Land, "Christians were once 20 percent of Jerusalem's population, today they are less than 2%."