A Catholic nun who lives in Ukraine near the Polish border recently commented on some of the atrocities committed by Russian soldiers, stating that they are raping and killing girls as young as 10 years old and "shooting innocent men point blank."

Sister Ligy Payyappilly, from India, is the Mother Superior of the Sisters of Saint Joseph of Saint-Marc in Mukachevo, Ukraine. The house for the sisters is near "the borders with Poland, Slovakia, Hungary, and Romania and therefore a crossing point for refugees fleeing the conflict in the east of Ukraine," reported Crux, a Catholic news outlet.

In extensive conversation with reporter Nirmala Carvalho, Sister Payyappilly said the Russian invasion is a "butchering of the innocents" and "no civilized society can approve it." 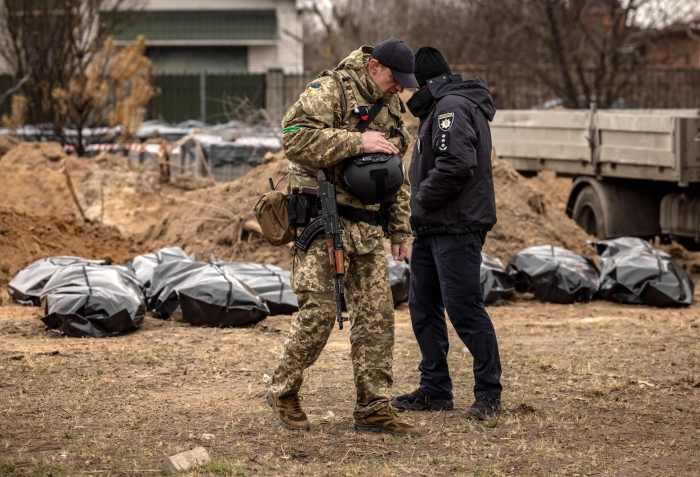 A member of the Ukrainian army and a policeman stand near body bags exhumed from a mass grave where civilians where buried in Bucha, on the outskirts of Kyiv, on April 13, 2022, amid Russia's military invasion launched on Ukraine. (Getty Images)

At the Sisters' house, where refugees sometimes stay, "women and girls have recounted the abuse and they are suffering at the hands of Russian soldiers," said Payyappilly. "Women are grappling with the threat of rape as a weapon of war.  The Russian army physically tortures and kills a mother in front of a six-year-old son."

“The cruelty and vicious persecution of the soldiers against the mother -- after being raped brutally -- and the woman died of physical and mental anguish in front of her son," she said. "The six bodies of women being found under a tire in Kargiv. The Russian army has carried out mass killings and dead bodies can be seen on the roadsides without having arms and legs. I do not know how many days it will take to bury them."

(In the video below, Sister Payyappilly asks for prayers for Ukraine.)

The nun continued, “It all started eight years ago [when Russia first occupied Crimea and parts of eastern Ukraine] and now, since February 24, this war has become our Good Friday. We know that when Jesus went up from Pilate to Golgotha, his face and clothes covered in blood – the same is happening today in Ukraine. The blood of the innocent is everywhere."

“Truly, here we can meet many mothers who mourn their children just as Mary suffered before the Cross for her beloved Son," said Sister Payyappilly. "I am sure that Our Lady is interceding for Ukrainian mothers. She can understand the pain of these mothers."

"For Ukraine, the more this war goes on, the more innocent people will die, especially women and children," she added. "Here we can see so much cruelty --  9-, 10-, 11-year-old girls raped by Russian soldiers and killed. Today Golgotha is really in Ukraine."

Golgatha was the name of the hill where Jesus was crucified. (Below is a video of the religious house in Mukachevo, Ukraine, where the Sisters of Saint Joseph of Saint-Marc care for refugees from the war.)

“Is it what we call war?" she said. "Shooting innocent men point blank, raping young women and mothers in front of their children, brutally injuring the pregnant women? How can these people become so cruel?”

Sister Payyappilly further said, “But we know that Easter comes after Good Friday. We believe and know that God is with us. Easter will come for us too. Our sufferings will end. Let us pray that the dawn of the Resurrection may come for us, too."