In a 2019 interview for the National Geographic book, Women, republished in the magazine on July 8, 2020, Black Lives Matter co-founder Alicia Garza declared that overcoming “patriarchy” was a major hurdle for her, and she added that Congress is largely comprised of “white Christian men,” which is a “big problem.”

In the National Geographic interview, Editor-in-Chief Susan Goldberg asked Garza, “What do you think is the single most important change that needs to happen for women in the next 10 years?” 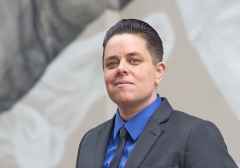 In her response, Garza said, “A vast majority of the U.S. Congress is white Christian men. That’s a big problem, considering Congress is where resources are being distributed, where laws are being made. As long as we’re underrepresented in positions of power and decision-making bodies like that, it’s going to be a big challenge to us being able to get the things that we need and want for our futures.”

When asked “what are the biggest hurdles that you had to overcome?” Garza said, “Patriarchy is a huge one. Racism.”

Garza also cited, “Women dying in pursuit of being able to live a dignified life,” and, “Women being shackled while giving birth inside of prisons and jails, where we’re over-represented for crimes of poverty.”

In a February 2020 interview with Black Perspectives, Alicia Garza explained that she got involved in “social justice work” when she was 12. “I got involved in a campaign to allow the school nurse to carry condoms,” she said.

Garza went on to explain that she was involved in the “reproductive rights movement” for about a decade. However, she became “really disillusioned” with that work “because I began to learn more about some of the racist history that had become intertwined with that movement,” she said.

“I learned about Margaret Sanger and the eugenics movement, which was directed towards Black people and people of color,” said Garza.

After college, Garza said she was “trained in organizing by doing a program through the School of Unity and Liberation.”