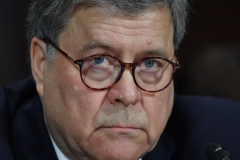 U.S. Attorney General William P. Barr said it was "stunning" that the liberal media have only produced "bovine silence" since the "complete collapse of the so-called Russiagate scandal." He added that, in comparison to the President Lincoln assassination, the effort to remove President Trump is "the closest we have come to an organized effort to push a president out of office."

Attorney General Barr made his remarks during an interview with host Maria Bartiromo on FNC's Sunday Morning Futures.

During the lengthy June 21 interview, Bartiromo said, "We're waiting on John Durham's investigation, a criminal investigation. What bearing does the election have on that? I haven't heard any Democrats raise any upset over the fact that wiretapping of an American citizen was illegal, an FBI agent changed evidence, changed a document, a whole host of issues.  So, am I to believe that, if we don't get the results of the John Durham investigation before the election, and Donald Trump loses, we won't hear another word about this?"

Barr said, "Well, first, I agree with you that it's been stunning that all we have gotten from the mainstream media is sort of bovine silence in the face of the complete collapse of the so-called Russiagate scandal, which they did all they could to sensationalize and drive."

"And it's like, not even a whoops" and "they're just onto the next false scandal," he said. "So, that has been surprising to me that people aren't concerned about civil liberties and the integrity of our governmental process."

"In terms of the future of Durham's investigation, he's pressing ahead as hard as he can," said Barr. "And I expect that we will have some developments, hopefully before the end of the summer. But, as I have said, his investigation will continue. It's not going to stop because of the election. What happens after the election may depend on who wins the election."

Bartiromo then asked, "A source said to me a couple of years ago, speaking of the Russia collusion story, that this was the closest the United States ever came to a coup to take down a president since the assassination of Lincoln.  Is that an appropriate statement?"

Republican President Abraham Lincoln with General George B. McClellan and other officers at his headquarters at Antietam, October 3, 1862. Lincoln was assassinated on Apr. 14, 1865 by John Wilkes Booth, a supporter of the Confederacy. (Getty Images)assassinated

"In this sense," replied Barr, "I think it is the closest we have come to an organized effort to push a president out of office."

"And it continues," said Bartiromo.

She also asked Barr, "Lindsey Graham told us that four FBI case agents talked to the Russian sub-source, in other words, the person who compiled some of the information in the dossier, and that sub-source told those agents that it was just bar talk, that it wasn't true, that we didn't really buy it anyway. Did those case agents tell their superiors that?"

Barr said, "Again, I don't want to get into the details, because those are the kinds of things we're looking at. But that whole vignette is laid out to some extent in the I.G.'s report, that, in January 2017 and in March 2017, they talked to the primary sub-source, who was the sole conduit for this information that made up the dossier."

He continued, "And, as I have said, the dossier pretty much collapsed at that point. And yet they continued to use it as a basis for pursuing this counterintelligence investigation."