Sen. Kamala Harris Introduced as the Next President at Texas Campaign Rally 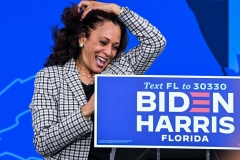 Sen. Kamala Harris (D-Calif.), Democratic presidential nominee Joe Biden’s running mate, was introduced at a campaign rally in Fort Worth, Texas, on Friday as “the next president.”

“Without further delay, I am so honored to introduce the next president of the United States, Sen. Kamala Harris,” Texas State Director for the Biden campaign Rebecca Acuña said in her introduction of the senator, which she appeared to read from a paper on the podium.

President Donald Trump had already been warning his supporters that the minute Biden gets elected, the Democrats will give him the boot and make Harris the president.

“If he gets elected, three weeks into his presidency, they’ll say, ‘Kamala are you ready? Let’s go,'” Trump said at a campaign rally in Michigan on Tuesday.

“That’s why they talk about the 25th Amendment right?” Trump said.

“Three weeks,” he said. “Three weeks and Joe’s shot. ‘Let’s go Kamala are you ready?’ Most liberal person in the Senate.”