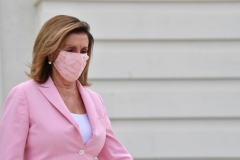 Residents of San Francisco haven’t been able to go to the hair salon for nearly six months because of COVID-19.

It wasn’t until Tuesday that the city relaxed its restrictions only allowing salons to cut people’s hair outdoors.

Haircuts are allowed, but shampooing is not, according to the guidance.

However, that didn’t stop House Speaker Nancy Pelosi (D-Calif.) from going to the salon in San Francisco, getting her hair washed inside, and not properly wearing a mask on Aug. 31.

Pelosi was seen on security footage at eSalon one day before the restrictions were relaxed with wet hair and her mask pulled down, according to local Fox News affiliate KTVU.

Fox News reports that the salon’s owner Erica Kious said the speaker had an appointment with a stylist who rents space in the salon.

Kious called it “a slap in the face” that Pelosi went in, “that she feels that she can just go and get her stuff done while no one else can go in,” and the owner can’t work.

According to Kious, Pelosi got her hair washed and blow-dried.

Pelosi’s office told KTVU she didn’t think she did anything wrong by getting her hair done indoors.

“The Speaker always wears a mask and complies with local COVID requirements. This business offered for the Speaker to come in on Monday and told her they were allowed by the city to have one customer at a time in the business. The Speaker complied with the rules as presented to her by this establishment," said  Drew Hammill, deputy chief of staff for Pelosi.

Harmeet Dhillon, an attorney and co-chair of Lawyers For Trump, called Pelosi “a disgusting hypocrite” and called for Pelosi and maybe even the salon to be fined.

"I've represented other types of businesses that have been severely punished for violating the very same law that Nancy Pelosi broke yesterday," Dhillon told KTVU.