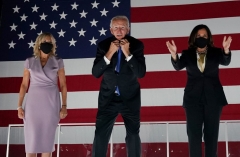 Former vice-president and Democratic presidential nominee Joe Biden briefly removes his mask as he greets supporters along with his wife Jill Biden and Senator from California and Democratic vice presidential nominee Kamala Harris outside the Chase Center in Wilmington, Delaware, at the conclusion of the Democratic National Convention, held virtually amid the novel coronavirus pandemic, on August 20, 2020. (Photo by OLIVIER DOULIERY/AFP via Getty Images)

One day after Sen. Kamala Harris (D-Calif.), the Democratic vice presidential running mate to former Vice President Joe Biden, referred to what “a Harris administration” will do, Biden himself has the same gaffe.

Speaking at a veterans’ roundtable discussion in Tampa Bay, Fla., the Democratic presidential nominee said, “Harris/Biden administration is going to relaunch that effort and keep pushing further to make it easier for military spouses and veterans to find meaningful careers to ensure teachers know how to support military children in their classrooms and to improve support for military caregivers and survivors so much more than we do now.”

As CNSNews.com reported, Harris was taking part in a virtual roundtable with small business owners in Arizona when she referred to “a Harris administration together with Joe Biden” before correcting herself and saying, “the Biden-Harris administration.”

“We need make sure you have a president in the White House who actually sees you, who understands your needs, who understands the dignity of your work and who has your back,” she said on Monday.