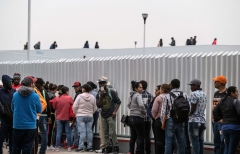 Asylum seekers queue for a turn for an asylum appointment with US authorities, at the US-Mexico El Chaparral crossing port in Tijuana, Baja California State, Mexico, on May 31, 2019. - Washington will impose a five percent tariff on all goods from Mexico starting on June 10, a measure that will last until "illegal migrants" stop coming through the country into the US, President Donald Trump said Thursday. (Photo credit should read GUILLERMO ARIAS/AFP via Getty Images)

According to the Institute on Taxation and Economic Policy, the Heroes Act also includes a retroactive change to the CARES Act, which included the first round of stimulus checks. The change allows illegal immigrants who file taxes using an ITIN to receive money from initial payments.

The group estimated that “more than 4.3 million adults and 3.5 million children would benefit from this change.”

Because of the retroactive clause, an additional $7 billion in aid would be disbursed.

Senate Republicans and President Donald Trump have indicated that they don’t support the bill.

"Another round of checks for illegal immigrants. Can you believe it? We forgot to have the Treasury Department send money to people here illegally. My goodness, what an oversight. Thank goodness Democrats are on the case," Senate Majority Leader Mitch McConnell (R-Ky.) said Thursday on the House floor.

As CNSNews.com previously reported, Trump said the Heroes Act is “dead on arrival,” in part because it calls for mail-in voting, something the president said is prone to “corruption.”