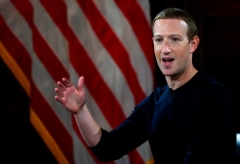 Facebook founder Mark Zuckerberg speaks at Georgetown University in a 'Conversation on Free Expression" in Washington, DC on October 17, 2019. (Photo by ANDREW CABALLERO-REYNOLDS/AFP via Getty Images)

President Donald Trump is poised to sign an executive order on social media on Thursday after Twitter fact-checked his tweet about mail-in voting being subject to fraud.

Meanwhile, in an interview to air Thursday afternoon on Fox News’ “The Daily Briefing with Dana Perino,” Facebook CEO Mark Zuckerberg, whose platform fact-checks news articles and has been accused of conservative censorship, said that Twitter was wrong to fact-check the president.

"I just believe strongly that Facebook shouldn't be the arbiter of truth of everything that people say online. In general, private companies probably shouldn't be, especially these platform companies, shouldn't be in the position of doing that," he said.

“I'd have to understand what they actually would intend to do,” Zuckerberg said. “But in general, I think a government choosing to censor a platform because they're worried about censorship doesn't exactly strike me as the right reflex.”

Zuckerberg said that his platform has a “different policy” for fact-checking posts from politicians, Fox Business reports. He said that privately held companies should avoid policing political content on their platforms.

“This will be a Big Day for Social Media and FAIRNESS!” the president teased in a Thursday morning tweet.

The president tweeted Wednesday that “Twitter has now shown that everything we have been saying about them (and their other compatriots) is correct. Big action to follow!”

“Republicans feel that Social Media Platforms totally silence conservatives voices. We will strongly regulate, or close them down, before we can ever allow this to happen. We saw what they attempted to do, and failed, in 2016. We can’t let a more sophisticated version of that happen again. Just like we can’t let large scale Mail-In Ballots take root in our Country. It would be a free for all on cheating, forgery and the theft of Ballots. Whoever cheated the most would win. Likewise, Social Media. Clean up your act, NOW!!!!” he tweeted.