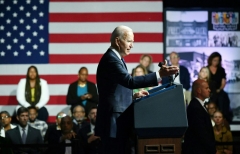 US President Joe Biden speaks during a commemoration of the 100th anniversary of the Tulsa Race Massacre at the Greenwood Cultural Center in Tulsa, Oklahoma, on June 1, 2021. (Photo by MANDEL NGAN/AFP via Getty Images)

Before giving his speech in remembrance of the 1921 Tulsa race massacre - considered to be one of the worst incidents of racial violence in U.S. history - President Joe Biden wandered off stage to see if two white girls want ice cream.

As soon as the president was introduced, he stepped up to the podium, asked the predominantly African-American crowd to have a seat.

“Please if you have a seat, sit down, and I gotta make one check,” he said.

The president walked over to the two little girls who were seated in the front row off to the side of the stage and talked to them and their mother.

He walked back on stage, and announced, “I just had to make sure that two girls got ice cream when this is over.”

“Imagine how excited you’d be when you’re 4? 5?” he asked their mother. “Almost 5 years old coming to hear a president speak. My Lord, in my faith we call that purgatory.”