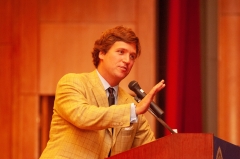 Unlike those responsible for the disaster in Afghanistan, the captain of the Titanic took responsibility when his ship hit an iceberg, Fox News host Tucker Carlson opined Monday.

Carlson used the parallel to convey how American leaders used to understand the responsibilities that came with their positions.

"Until fairly recently, the people in charge understood that leadership comes with obligations; it's not all privileges," the host said. "If you're going to make big decisions, you have to be willing to suffer if they go wrong."

Instead of taking any form of responsibility for this disaster that they caused, the Biden Administration, bewilderingly, is doing the opposite. They are bragging in public, with a straight face, about what a great job they have done.

Below is the transcript from “Tucker Carlson Tonight”.

Tucker Carlson: If you take three steps back, you can see very clearly that we’re watching some kind of pivot point in our history. The most obvious casualty apart from the 13 dead servicemen last week is American power and prestige, both of which, in the span of just days, have been profoundly and permanently diminished.

There will be huge consequences of this moment. You'll see them both in the near term; you'll see them in the generations going forward. But for now, it's worth answering a simple question: who is taking responsibility for this? Who's paying for the disaster we are watching?

Not so long ago, that would have been an easy question to answer: our leaders would be paying the price. Until fairly recently, the people in charge understood that leadership comes with obligations; it's not all privileges. If you're going to make big decisions, you have to be willing to suffer if they go wrong.

In the spring of 1912, Edward Smith ran his ship into an iceberg in the North Atlantic. As it went down, Smith did not blame climate change for the disaster; instead, he stood stoically in the wheelhouse and rode the Titanic to the bottom of the ocean and people applauded. It didn't seem strange; it was expected. He was in charge; he stayed until the end.

So who's in charge of this, and more to the point, who is paying for it? Well, over time, an entire class of foreign policy experts and political leaders are responsible. They watched for 20 years as Afghanistan turned into a pointless mess in which Americans died and were damaged beyond repair. And as this happened, they said nothing; in fact, they lied about it, repeatedly. Who are these people? The name Liz Cheney comes to mind, but there are many, many like her.

And then there are the people who are responsible for what has happened in the last couple of weeks: a pullout that could not have been more ineptly managed if you'd intended to screw it up. That would be Joe Biden and his many incompetent lieutenants, some of whom seem deranged.

So what is their punishment? How many of them have been fired? How many have resigned? How many have even apologized? That's the best place to start, always. To our knowledge, none, not one. In fact, so far as we can tell, the only military leader to suffer so far for this disaster is a Marine Corp lieutenant colonel called Stu Scheller.

Now Scheller didn't decide to abandon Bagram Air Base; the blood of those 13 servicemen last week are not on his hands. Scheller's crime was posting this video on social media.

Stu Scheller: If an 05 battalion commander has the simplest live fire incident [unintelligible] complaint, boom. Fired. But we have a secretary of Defense that testified at Congress in May that the Afghan National Security Force could withstand the Taliban advance. We have chairmens, a joint chief who is [unintelligible] is a member of that, who's supposed to advise on military policy, we have a Marine combatant commander. All of these people are supposed to advise, and I'm not saying we've got to be in Afghanistan forever, but I am saying, did any of you throw your rank on the table and say, “Hey, it’s a bad idea to evacuate Bagram Airfield,” a strategic airbase, before we evacuate everyone?

Carlson: So, this is a disaster; that is obvious. The disaster is a result of a series of bad decisions made by people whose names we know. Have any of those people been punished, explained themselves, or apologized? That's the question that Stu Scheller asked, and for asking it, the Pentagon relieved him of his command.

On Sunday, Stu Scheller announced that he was resigning from the Marine Corps. He has three years until retirement and the pension that comes with it, but he is leaving. Here's why.

I think them accepting accountability would do more for servicemembers, and PTSD, and struggling with purpose than any other transparent piece of paper or message. And I haven't received that.

Carlson: Yeah. I mean, thousands of Americans died in Afghanistan, tens of thousands, hundreds of thousands were permanently damaged by the time they spent there, over 20 years, and the exit diminishes our country permanently.

Who did that and why haven't they apologized? It's a really simple question, and for asking it, Scheller was relieved of command. Instead of taking any form of responsibility for this disaster that they caused, the Biden Administration, bewilderingly, is doing the opposite. They are bragging in public, with a straight face, about what a great job they have done.