Tucker: In the Age of 'Not Your Body, Not Your Choice' Vaccines, What's Dems' Argument Against Texas Abortion Law? 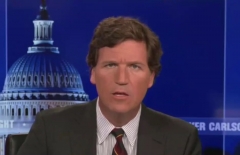 Democrats who have argued "my body, my choice" when it comes to abortion do not have much ground to stand on with Texas' abortion law after pushing vaccine mandates that violate bodily autonomy during the past few months, Fox News host Tucker Carlson argued Thursday.

Carlson and radio host Dana Loesch discussed how the left’s actions and demands during the pandemic have contradicted their previous arguments in support of abortion.

“Everyone who has been screaming, “My body, my choice” all of these years, who has been speaking out for, in favor of government-mandated vaccines, can all have a million seats right now because this has all been a giant grift,” Loesch said.

"Maybe the only justification for abortion now is abortion itself; maybe they just like abortion, maybe it’s that simple," Carlson stated.

Below is a transcript of the “Tucker Carlson Show”:

Tucker Carlson: That's what they're telling you. These people can't even hear themselves. But millions of normal Americans do recognize this moment for what it is: it’s proof that democracy does still exist, voters can decide what they want for their communities, their states, their towns, and that courts will at least potentially respect that right. It's called self-government.

The legislature in Texas has realized this for months now; they’ve passed laws banning vaccine passports, homeless encampments, racist struggle sessions in schools, laws that block protests that prevent emergency vehicles from riding down the road, etcetera, etcetera; laws specific to Texas that the people of Texas want and a lot of those laws are still on the books. So that’s not a bad thing; how is that a bad thing? Why should Texas have to be exactly like California?

The problem is, if that kind of thinking goes national, it gravely disempowers the people at CNN and the so-called civil rights organizations that think they’re in control of everything. On the other hand, it might actually save civil rights for the rest of us and that might be a good thing.

Dana Loesch is a nationally syndicated radio host who we think lives in Texas; she joins us tonight. Thanks so much for coming on.

Carlson: The response to this, you’ve got to kind of wonder, now that we’ve decided that it’s not your body and you don’t get to choose what to do with it, politicians get to make that choice, what is the argument against this Texas law? It’s a sincere question.

However, Tucker, as you know, vaccines should be mandated to everybody by the government and the government's going to stand between you and your doctor. Everyone who has been screaming, “My body, my choice” all of these years, who has been speaking out for, in favor of government-mandated vaccines, can all have a million seats right now because this has all been a giant grift.

These people don’t care, it’s a great day for babies in Texas; I’ll just put it like that. This is a great day for babies in Texas and I don’t understand what all of these birthing persons were complaining about in Austin because remember like gender's a social construct, right? So, they opened the door wide to this, Tucker, as you said: birthing persons.

Carlson: They can’t think clearly because they gave up all of their arguments: it’s a woman’s choice, your body is autonomous, politicians don’t have a right to make healthcare decisions.

So maybe the only justification for abortion now is abortion itself; maybe they just like abortion, maybe it’s that simple.

Loesch: Well, at least that's what they’re trying to argue it. I mean, it’s evil, it ends a life, I don’t know anything that ends a life that is called healthcare; that’s death, that’s murder, that’s killing.