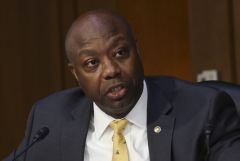 “When you have more than 1.3 million people illegally crossing your border, they’re not assimilating, they’re not acclimating, and frankly, they’re actually not going to even show up for any of their hearings," Sen. Tim Scott (R-S.C.) argued on "Life, Liberty & Levin" Sunday.

Sen. Scott claimed that the "Remain in Mexico" policy helped remedy the border crisis, but that the current situation is a "Biden-made disaster."

“The Haitians have said it, people from other countries have said the exact same thing, that we’re coming to the border because the president of the United States has sent the signal that that is welcome, an opportunity to come across."

Below is a transcript of this segment from "Life, Liberty & Levin":

“The president has an obligation under the Constitution to enforce these immigration laws, of which there are many.

Levin: "I’ve just never seen anything like this before. What do you make of this?”

Sen. Scott: “Well, Mark, this is unprecedented; that’s why you’ve never seen anything like this before. It makes your stomach turn, it makes you nauseous because we are the city on the hill. We are the bright, shining light for the world to see. If we can’t control our borders, no one else can.

“Here’s the truth. We had a president, under President Donald Trump, that wanted to secure our border. I supported and voted for more resources to build a wall so that you can control the inflow into your country. The fact is that the Remain in Mexico policy saw the border crisis plummet, the border crossings plummet. But under the Biden Administration, this is a Biden-made disaster.

“If you cannot answer those three fundamental questions, you have a national security risk that is something you can’t even measure. Second, we certainly have an illegal immigration crisis in this country brought to us by Biden saying, by default, the borders are open, come onto the border. The Haitians have said it, people from other countries have said the exact same thing, that we’re coming to the border because the president of the United States has sent the signal that that is welcome, an opportunity to come across.

“And here’s what we know. We know that when you have more than 1.3 million people illegally crossing your border, they’re not assimilating, they’re not acclimating, and frankly, they’re actually not going to even show up for any of their hearings. That is more than problematic, that is more than concerning, that is a problem that we are going to have to get our arms around. And the best and fastest way to get our arms around it, or course, is to win elections.

“We have to change who is in charge of these decisions because the Biden Administration, without any checks and balances through Congress, has literally opened the floodgates of our country.

“And frankly, you can look at the situation in Afghanistan and come to the same conclusion that when you watch planes leave the country without an appropriate vetting process, we have a border crisis on top of another border crisis.

“One border is the physical southern border, the other is the imaginary air flight into our country that is also concerning, as well. So we have to reward those who helped us, but vet every single person. The trust and verify is one component that is missing from this entire discussion.

“And the third crisis on our southern border is the humanitarian crisis. We are literally watching people come into this country that will be sold into sex slavery. Why? Because they thought the borders were open, and they get here and they’re used as physical bait.

“This is wrong. It is not who we are as Americans and frankly, closing the border, taking down the sign ‘Open Border,’ will only save more lives in my estimation, and it will give us a chance to restore order on our southern border.”