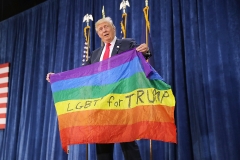 The Republican National Committee (RNC) announced its partnership with the Log Cabin Republicans at Donald Trump’s Mar-a-Lago resort this weekend, creating its first “Pride Coalition,” which will invest in and mobilize LGBTQ+ communities ahead of the 2022 midterm elections, Fox News reported.

The Spirit of Lincoln Gala, held at Mar-a-Lago in Palm Beach, Florida was hosted by the Log Cabin Republicans, an organization representing LGBTQ conservatives and their allies, on Saturday night.

As president (2017-2020), Trump referred to Mar-a-Lago as his “Winter White House.” He and his wife, Melania Trump, were the guests of honor at Saturday’s event.

At the gala, RNC Chairwoman Ronna McDaniel was awarded the “Majority Maker” prize and announced her commitment to “fight for every vote and share our party’s message in every community,” the RNC retweeted.

"Conservatives in Log Cabin don’t just share our vision for a free, secure and prosperous America — they enrich it by adding unique perspectives to our party and recruiting even more diverse candidates and supporters to join our cause," McDaniel said at the gala.

Log Cabin Republicans endorsed Republican candidates in the Virginia and New Jersey gubernatorial races, and are planning to play an even larger role in the 2022 midterm elections.

I am incredibly honored to receive the @LogCabinGOP 2021 Majority Maker Award!

Grenell was the first openly-gay U.S. Cabinet Official in history, and he marveled at the changes in the Republican Party’s conduct since the 1990s.

President Trump comes by the donor lunch for the @LogCabinGOP weekend at Mar a Lago.

Tonight, @MELANIATRUMP is honored by gay conservatives for her incredible work to be @GetOutspokenUSA about real equality.

The event is completely sold out. We’ve had to turn people away. pic.twitter.com/5mvECLu1zb

“We were at an event where the former president of the United States and first lady are welcoming us, and hosting 600 influential gays, lesbians and their straight allies," Grenell said. "It is phenomenal for me to look back and see this and to champion an organization like Log Cabin."

However, some conservatives have expressed their disagreement with the RNC’s new partnership.

“If the Republican Party is going to fully embrace leftist sexual identity politics, then it officially serves no purpose,” Walsh wrote.

Trump hosted and attended an event over the weekend where the GOP unveiled its new "RNC Pride Coalition." If the Republican Party is going to fully embrace leftist sexual identity politics, then it officially serves no purpose.

Bryson Gray, the rapper who topped the charts with his song “Let’s Go Brandon,” also tweeted that if this was the direction of the Republican Party, you could count him out.

“If the gop is deciding to pander more to the LGBT community, then count me out. Doesn’t matter who’s running,” Gray said.

Other conservatives have often explained that there is no such thing as a “gay conservative,” because homosexual behavior is contrary to Nature and the natural law, which follows God’s design in the physical world.  “So God created man in His own image, in the image of God He created him; male and female He created them.” (Gen. 1:27)

Homosexual behavior and its acceptance and promotion contribute to the destruction of the entire natural order, and therefore cannot be conservative but always revolutionary.