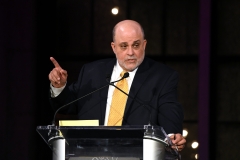 "How many Anne Franks are hiding in cellars all across that country today?" Mark Levin asked on “Hannity” Wednesday, after the Biden Administration left hundreds of Americans and American allies in Afghanistan.

Levin focused on those who are now trapped in Afghanistan and questioned the decision making of President Biden and his advisors because of their choice to pull out soldiers first and citizens second.

Do you think George Patton or Omar Bradley, or the top general, George Marshall, would leave American citizens in enemy territory under any circumstances or conditions, including at the order of the commander-in-chief?...Joe Biden, you have blood on the hands for the rest of your life.

Below is a transcript of this portion of “Hannity”:

I want to read something; I never do this. I went back to Dwight Eisenhower’s book “Crusade in Europe.” When he went to the death camps, he said, “The same day, April 12, 1945, I saw my first horror camp. It was near the town of Gotha. I've never felt able to describe my emotional reactions when I first came face-to-face with the indisputable evidence of Nazi brutality against the Jews and ruthless disregard of every shred of decency.”

“Up to that time, I had known about it only generally or through secondary sources. I am certain, however, that I have never, at any other time, experienced an equal sense of shock. I visited every nook and cranny of the camp because I felt it my duty to be in a position from then on to testify it first-hand about these things, in case these ever grew up at home, the belief or assumption that the stories of Nazi brutality were just propaganda.”

“Some members of the visiting party were unable to go through with the ordeal. I not only did so, but as soon as I returned to Patton’s headquarters that evening, I sent communications to both Washington and London, urging the two governments to send instantly to Germany a random group of newspaper editors and representative groups from the national legislatures.”

“I felt the evidence should be immediately placed before the American and British publics in a fashion that would leave no room, no room for cynical doubt.”

Do you think George Patton or Omar Bradley, or the top general, George Marshall, would leave American citizens in enemy territory under any circumstances or conditions, including at the order of the commander-in-chief?

While they're celebrating at the State Department and the Defense Department and at the White House, and while they want to turn the corner and change the politics -- the human infrastructure of all things and the COVID-19 -- by God, I've never been more disgusted with my government and the top brass of the United States military than I am right now.

This is a humiliation for our country. It is part of our history that can never be wiped away. And I feel so horrible for our American troops, our real soldiers, who would not have tolerated this but for General [Lloyd] Austin and General Milley and all the rest of them. And most of all, Joe Biden, you have blood on the hands for the rest of your life. That's it; I'm done.