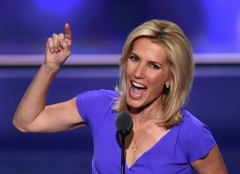 Author and pundit Laura Ingraham speaks on the third day of the Republican National Convention in Cleveland, Ohio, on July 20, 2016.

Fox News host Laura Ingraham condemned the media Monday for a shortfall in reporting on the Christmas parade attack in Waukesha, Wisc.

Ingraham argued that the media did this because alleged attacker Darrell Brooks was black, the victims were white, the suspect shared pro-Black Lives Matter and anti-white content on social media, the victims were celebrating a holiday the left detests, and a district attorney funded by billionaire George Soros let Brooks out of jail on a $1,000 bond.

“The inconvenient truth here is that this is an act of political and racial hatred, and the media are all trying to cover it up,” Ingraham said before speaking with author Dinesh D'Souza.

Below is a transcript of this segment from "The Ingraham Angle":

Laura Ingraham: “When the truth about this Waukesha attack didn’t align with their predetermined narrative, well, the media simply stopped talking about it. And when they do, as CNN did yester-year, yesterday, this is their framing.

“‘Waukesha will hold a moment of silence today, marking one week since a car drove through a city Christmas parade.’

“Six people were murdered, children are still in critical condition, but the media are past it. No investigation into Darrell Brooks' background, motives, racist views, none of it.

“So why are they doing this? Well, it doesn’t fit their narrative; let’s count the ways. One, the race of the alleged attacker: he was black. Two, the race of the victims were white. Three, the suspect was a BLM [Black Lives Matter] fanboy with anti-white views. Four, the victims were participating in a Christmas parade, which is a holiday the left hates. And five, a Soros-funded DA [district attorney] let this serial criminal out of jail on a thousand-dollar bond two days prior to the attack.

“The inconvenient truth here is that this is an act of political and racial hatred and the media, they're all trying to cover it up.

Dinesh D’Souza: “Absolutely. You know, you mentioned the different elements of the narrative and each one of them is a kind of spear into the narrative of the left. This is why they tried to make it seem like the car did it; there wasn’t a perpetrator, he wasn’t a black perpetrator.

“You know, as a film di -- I often look at motive. Motive is critical to understanding why something happened. Now, let’s remember that in other cases -- the Kyle Rittenhouse case, even the Derek Chauvin case -- the left was very quick to jump to motive. 'These are white supremacists, the motive was based on race.'

“And yet, no racial motive turned up. In fact, racial motives weren’t even really introduced in the Chauvin trial. But here, where there is a racial motive, where it seems obvious that this is a guy who was not fleeing from one scene and happened to run into a parade, but rather a guy who intentionally swerved from left to right, obviously to kill as many people as possible, driven by an apparent racial animus that’s very evident in his own social media -- suddenly the media goes, ‘oh, we can’t salvage this narrative.’ So you realize here, this is a classic case of how the media operates like a house of mirrors. But it’s not mirrors that illuminate reality; these are refracting mirrors that give you distorted pictures of reality.

“And basically, once the narrative doesn’t really work anymore, they just turn out the lights and move onto something else.”