Kanye West: For Years, Democrats Have Been ‘Making Us Abort Our Children’ 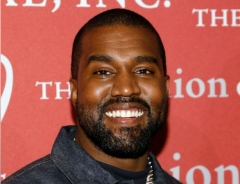 Songwriter and record producer Kanye West said his parents fought for the right to express their opinion, not the right to vote for politicians the “white liberals” said blacks are “supposed to vote for.” West added that Democrats have pushed policies that compel blacks to abort their children, in a recent interview with hip hop artist Big Boy (Gustavo Roy Diaz).

“Democrats had us voting [for] Democrats with food stamps for years,” said West in the Oct. 25 interview.

“What are you talking about?” he said. “Guns in the ’80s, taking the fathers out of the home, Plan B, lowering our votes, making us abort our children, thou shall not kill.”

“The culture has focused so much … rapping about things that can get you locked up, and then saying that you are about prison reform, we are brainwashed,” said West, who just released his new album Jesus is King.

During the interview, West addressed the backlash he has received after saying “George Bush doesn't care about black people,” and now criticism for declaring himself a Christian and the release of a gospel/rap album.

“They say, if you talk about politics, then you are not in service to Christ,” said West. “But to mute an African American voice at this level is a form of slavery, and being a slave to the system and to people’s perceptions.”

Then he made reference to comments made by other people in the entertainment industry about his support for President Donald Trump, saying that it is not about who he likes, but about having the right to like whoever he wants to like.

Kanye West dropped his album Jesus is King on Sep. 27, and since then it has been steering comments online. The rapper also started a church in Calabaza called “Sunday Service.”