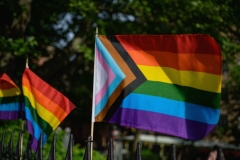 A Progress Pride flag and rainbow flags are seen at the Stonewall National Monument, the first US national monument dedicated to LGBTQ history and rights, marking the birthplace of the modern lesbian, gay, bisexual, transgender, and queer civil rights movement, on June 1, 2020 in New York City. (Photo by ANGELA WEISS/AFP via Getty Images)

A Pentagon spokesperson told reporters on Friday that they will not allow any “unofficial flags,” including the Pride month rainbow flag, to be displayed on military installations in the month of June or any month thereafter. This is in keeping with a July 2020 policy regarding the display of any such flag.

“There won’t be an exception made this month for the Pride flag,” said Pentagon spokesman John Kirby, the Military Times reported.

“This was really more about the potential for ... other challenges that could arise from that exception, that specific exception,” he further clarified.

The original policy was put in place by former Defense Secretary Mark Esper in response to an issue regarding the display of Confederate flags.

Kirby announced that Defense Secretary Lloyd Austin has no current plans to amend the policy, according to Military Times.

Pride flags, along with other unofficial flags such as the Black Lives Matter flag, have created a stir among Americans as they've been flown around the world at United States embassies.

CNSNews.com reported on the flying of Black Lives Matter flags in May and subsequently Pride rainbow flags in June at a multitude of institutions representing the United States.