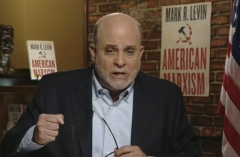 "She was in the building, she wasn't carrying a weapon; she was killed, a veteran of 14 years, a Trump supporter," he said. "We don't get any of the facts: who shot her and why she was shot? The police officer, the officer’s name is apparently a national security secret."

Below is a transcript from this segment of “Life, Liberty & Levin”:

Mark Levin: What has happened, exactly, to the hundreds of people who were involved on Jan. 6, some of whom broke into the Capitol Building, some of whom were on the Capitol Building steps, some of whom were on the Capitol Building grounds? Not the hundreds and hundreds and hundreds of thousands who came spontaneously that day to protest the election and to support Donald Trump, but the others: what has happened to them? We are supposed to be a republic, we are supposed to be a free country, we have a constitutional system. We have due process. Take a look at the Constitution -- we don't have secret trials in this country and yet what has happened to these people? We get little spurts of information here and there from the two or three independent reporters, none of whom are associated with big media or Big Tech, who are bothered to look into this.

What are we hearing? We’re hearing that we have more FBI resources applied to this than to anything else, that people are being rounded up all over the country and being charged, in some cases with misdemeanors. We have SWAT teams that are being used to collect people and bring them back to Washington. We're hearing that they’re in some of the worst jails and that some of them are being put in solitary confinement where they only have an hour where they can go outside, if that, that they’re being fed poor food, they're being treated like they're terrorists in Guantanamo Bay, where they’d be treated actually better. What's happening to these people and why is it that Joe Biden and Kamala Harris and Chuck Schumer and Nancy Pelosi don't give a damn? Where are all the civil libertarian groups? Where are the media, the media? The truth is that this was not an insurrection, let alone incitement for an insurrection.

There are hours and hours and hours of tape that the Department of Justice will not release. Why not? They will not release the name of the officer who shot Ashli Babbitt. Ashli Babbitt was not a threat to anybody. She was in the building, she wasn't carrying a weapon; she was killed, a veteran of 14 years, a Trump supporter. We don't get any of the facts: who shot her and why she was shot? The police officer, the officer’s name is apparently a national security secret. Now, part of what's going on here is the media and the Democrats and Biden want you to believe that this is part of a white supremacy movement, neo-Nazis and Klansman. It's not true, but if it is true, tell us who exactly are the neo-Nazis and the Klansmen. None of us support them. But they use this phrase "white supremacy" to attack our entire society under this critical race theory and so they move in and out of the language, move in and out of the definitions. It's white supremacist, it’s the greatest danger we face in this country, according to Biden.

Now, actually, those massive nuclear warheads that are aimed at our major cities by China and Russia and the ones that Iran wants to get, with the support of the Biden Administration, that’s the greatest threat we face, ladies and gentlemen. And so, you have to ask yourselves, what is going on here? Again, we hear that people are charged with misdemeanors, we hear that people are being threatened, that they may need to make plea agreements. We hear that they're being told that they have to pay funds so they can fix the Capitol Building. Then I ask myself: how about Black Lives Matter and Antifa? Who is rounding them up? Who’s sending SWAT teams out to get them? They did billions and billions and billions of dollars in damage. Looting, arson, assault, people died -- and I don't mean from heart attacks or strokes, I mean died -- police officers assaulted left and right.

You want to know about an insurrection? There’s a report that was just released by the Inspector General of the Interior Department, he spells it out, and isn’t it interesting, it got about 14 minutes of coverage, if that, by the major networks. We were told that Donald Trump and Bill Barr ordered that Lafayette Park be cleared and they used rubber bullets and tear gas on mostly peaceful protesters. First of all, mostly peaceful protesters? They almost burned down the historic church in Washington, D.C., St. John's Church. They were trying to charge the fence at the White House. Over 49 United States Park Police were injured. Over 50 Secret Service agents and uniformed agents were injured. We have a report now from the independent Inspector General that the media lied, that Donald Trump and Bill Barr never cleared Lafayette Park; it was cleared so they could get better fencing in there to protect the park from the mostly peaceful rioters, violent looters, and all the rest who were coming there to cause problems. The president of the United States and his family had to be taken to the nuclear bunker under the White House. That's an insurrection, ladies and gentlemen. These people were doing violence, some of them were armed with God knows what, they were burning, they were creating mayhem. They injured officers, they injured Secret Service. I'm not defending in any way what happened on Jan. 6 in the Capitol Building but I am saying we need a little bit of evenhandedness in justice here.

I want to know who it is they are rounding up, what’s happened to them, what they're being charged with. This information needs to be made public, absolutely made public. They need to release all the video that they’re sitting on because, as it turns out, some of that video, it appears that the Capitol Hill police were letting them into the building. We need to see that too.

Julia Johnson is a CNSNews intern and student at the University of South Carolina.