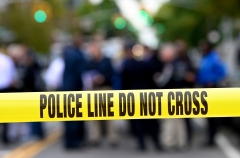 New York City and Chicago saw another weekend of violence with shooting victims totaling 64 in Chicago and 28 in New York City, including a 1-year-old boy, reported the local media Chicago Sun-Times and The New York Post.

In the Chicago shootings, 13 people died. The first fatal victim was Terrence Malden, who was shot at around 4:50 p.m. on Friday, reported the Chicago Sun-Times. Another five teenagers were shot between then and Monday.

Saturday’s victims included a 33-year-old woman killed and two 28-year-olds shot while standing on the street with a group of people, said The Sun-Times. All three were taken to the University of Chicago Medical Center, where the 33-year-old was pronounced dead and the other two were treated.

In New York City, 15 of the 28 shootings took place in a 15-hour period, according to The New York Post.

One of the most tragic shootings was the fatal shooting of a 1-year-old boy. The child was sitting in a stroller at a barbecue with his family outside of the Raymond Bush playground in Brooklyn late on Sunday night. The police believe the family was ambushed by a group that jumped out of a car, fired shots and drove away.

Police Chief Jeffrey Maddey tweeted early Monday, “A one year old child is dead. The baby was with his family enjoying a Sunday night in the summer when someone started shooting . Three people were injured and the baby was killed. This. Must. STOP! We as a community, we as a police department denounce this disgusting violence.”

Three other adults at the barbecue were injured but are expected to recover from their wounds.

Only two hours earlier a 12-year-old boy was shot while sitting in front of his home in Crown Heights.

Police do not have any suspects or motives for either of the children's cases.

The violent weekends in NYC and Chicago are the latest in an ongoing rise in shootings over recent weeks. Over the last 28 days, 440 people have been victims of shootings in NYC, according to police data.

The cause of the uptick in shootings remains unclear. Some have pointed to the economic downturn following COVID-19, while others have said the cuts to police budgets and presence have caused the increase. Officials with the NYC Police have indicated that prison releases and bail reform might be a significant factor as well.