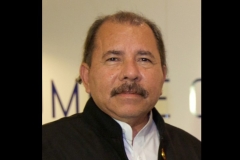 The Catholic Church is under increasing assault in Nicaragua by its president/dictator, Daniel Ortega, and his radical socialist regime, according to numerous media reports.

“The Catholic Church has been a common target of contempt and accusations of undermining the leftist regime,” reported the Heritage Foundation in an Aug. 8 commentary, “Christianity under Siege in Nicaragua.”

According to the commentary, Daniel Ortega has long been openly hostile to the Church and has increasingly persecuted Catholics, calling bishops “terrorists” and “devils in cassocks.”

The Catholic Church in Nicaragua has experienced more than 190 attacks since 2018, attacks ranging from exile of important priests and clergy, to arson, and government paramilitary attacks.

Further, 18 Catholic nuns who were Missionaries of Charity were recently “stripped of their legal status” in June and escorted by police into exile in Costa Rica. The nuns were accused of “political subversion and supporting terrorism,” and exiled for their “crimes.” 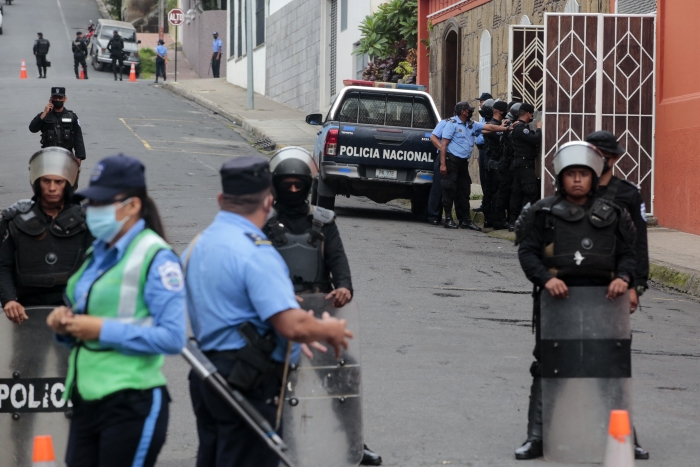 Riot police on Thursday prevented Nicaraguan Bishop, Rolando Alvarez, from leaving the church building to preside at a mass as part of a "prayer crusade" being carried out by the church, following the closure of several Catholic media outlets and allegations of harassment. (Getty Images)

Attorney Martha Patricia Molina Montenegro addressed this hostility towards Catholics in a report by the Pro-Transparency and Anti-Corruption Observatory, stating that the regime under Ortega has “initiated an indiscriminate persecution against bishops, priests, seminarians, religious, lay groups and toward everything that has a direct or indirect relationship with the Catholic Church.”

Ortega, a long-time Marxist radical, labeled the Church, which 60% of Nicaraguans belong to, as “committed to the coup-mongers [and] part of the coup-mongers’ plan,” according to the Heritage Foundation.

Nicaraguan Bishop Rolando Jose Alvarez has been held by the government in a church in Matagalpa since August 4, along with six other priests and six lay Catholics. Bishop Alvarez has frequently spoken out against the Sandinista regime and was detained for allegedly trying to “organize violent groups” in hopes of destabilizing the government.

Nicaraguan police accused Catholic Church leaders in a press release, and particularly Bishop Alvarez, of “using the communications media and social media” to “organize violent groups, inciting them to carry out acts of hatred against the population, creating an atmosphere of anxiety and disorder, disturbing the peace and harmony of the community.”

The press release also said the clergy and lay people seek to destabilize Nicaragua and attack “the constitutional authorities.”

“The road outside our clergy house is closed off by the national police,” Bishop Alvarez said, “And the main gate, as well as the garage, are also blocked by the riot police. However, even in this situation, we maintain our joy, our strength and our inner peace.”

Catholics in Nicaragua expressing their solidarity with the persecuted Bishop Rolando Alvarez. pic.twitter.com/gxZCvgVYqh

Catholic leader and well-known critic of the regime, Monsignor Silvio Baez, was forced to flee  Nicaragua in 2019 when the U.S. Embassy warned him of plans to assassinate him. The Monsignor had previously been stabbed, beaten, and threatened repeatedly for his criticism of the regime.

Ortega’s government also expelled Monsignor Waldemar Stanislaw Sommertag, the pope’s representative in Nicaragua, in March of this year.  Further hostilities towards the Church under the Ortega regime include the closing of eight Catholic radio stations on August 1 of this year.

Once again, the government of #Nicaragua tries to silence the Catholic Church, closing yet another diocesan radio, claiming it has been running illegally for almost two decades, despite evidence to the contrary.

Being a #Catholic in Nicaragua today is basically a crime. pic.twitter.com/ht4cu0HO3q

According to the Heritage Foundation, the Trump administration spoke out against this rampant “persecution of Christians, with then-Vice President Mike Pence calling out Ortega and Venezuelan Dictator Nicolas Maduro on their violations of religious liberty and freedom of speech.”

The U.S. State Department, European Union, and the Bishops of the Latin American and Caribbean Episcopal Council (CELAM) have all condemned these persecutions.

U.S. Customs and Border Protection estimated that at least 170,000 Nicaraguans have fled to America since 2021 because of the repression under Ortega.

At this moment Ortega “continues to target the Catholic Church and its believers in a quest to purge all dissent,” said the Heritage Foundation.

Pope Francis has yet to comment on th increasingly hostile situation in Nicaragua, and news outlets are calling his silence to an open war on the Church “scandalous.”

Agustin Antonetti, director of Latin America Watch, said, “Pope Francis’ silence on what’s going on in Nicaragua is scandalous. Daniel Ortega’s dictatorship is taking the churches by force, they have shut down all their channels and radios, even one priest is in jail, and the rest are afraid of being kidnapped.”

Writer Sergio Ramirez also spoke out about the Pope’s silence in an interview stating,

“Pope Francis has kept a silence that is heard around the world about the situation in Nicaragua. It would be advisable for all the Catholic faithful of Nicaragua, who are half the population, to listen to what the Pope has to say about this barbarism that has been happening since 2018 and that continues to happen now with the arrest of so many people, with the unstoppable growth of political prisoners.”

👉🏿Dear Holy Father @Pontifex please listen to the clamours for help from the Catholic priests in #Nicaragua RT While the Local Church Fights Ortega in Nicaragua, Pope Francis Is Silent https://t.co/CMq3Rkr35v