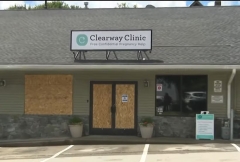 Last Thursday morning, two women’s pregnancy counseling clinics in Worcester, Massachusetts were vandalized, and the head of one of them is calling the attack on her center “domestic terrorism.”

Both Clearway Center and the nearby Problem Pregnancy clinic were hit. Glass doors and windows were smashed in, paint was splattered, and the entrances to the clinics were spray-painted in black with the words, “Jane’s Revenge,” the name of a radical pro-abortion group, which has yet to publicly claim responsibility for the attacks.

The Clearway Clinic is a crisis pregnancy center that has been assisting women considering abortions in both Central and Western Massachusetts for nearly twenty-two years, serving ten thousand families during that time.

“We call on our state officials to publicly condemn the domestic terrorist attack against our organization. Violence against our center harms the women, babies, and families that rely on us for help in times of need,” Clearway Clinic Executive Director Kelly Wilcox said in a statement regarding the vandalism.

“We are deeply saddened that misunderstandings about what we do have led to pro-abortion extremists targeting our center,” Wilcox says. “However, we are committed to continuing our mission of serving women in our community.”

“All women are welcome regardless of what they ultimately decide to do. We provide HIPAA compliant, compassionate care and a safe environment for women to review all their options. Our exit surveys bear this out with a client satisfaction rate of more than 98 percent,” the statement notes.

The Clearway Clinic provides a variety of resources, such as “Pregnancy diagnosis, STI testing and treatment, prenatal health classes, post-abortion care, diapers, vitamins, baby clothing, strollers, furniture, and other materials. We also provide referrals for resources like maternity housing, adoption, food security, job training, and more.” While it does not provide abortions, the center discloses that fact before making appointments.

Violence against pro-life groups and churches has surged since the Supreme Court’s overturning of Roe v. Wade, which had established a national right to abortion. Since the court’s decision was leaked in May, more than two hundred threats have been uncovered by the FBI. Susan B. Anthony Pro-Life America has also listed at least forty-five violent assaults on pro-life-affiliated groups.