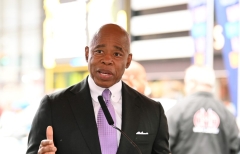 NYC Mayor Eric Adams (D) has criticized Texas GOP Governor Greg Abbot for sending busloads of illegal immigrants from the U.S.-Mexico border to the Big Apple, calling it “horrific” and the exploitation of “innocent people as political pawns to manufacture a crisis.”

In the midst of the ongoing border crisis, Gov. Abbot has begun sending migrants to sanctuary cities, such as New York. According to Business Insider, the Governor has sent over 6,100 illegal immigrants to Washington D.C.

In April, Abbot announced he would send migrants to D.C. to “cope with this latest escalation of the Biden border disaster,” sparked then by president ending Title 42, the public health order that blocked many migrants from entering the U.S. during the pandemic.

Abbot stated in a press release, “Because of President Biden’s continued refusal to acknowledge the crisis caused by his open border policies, the State of Texas has had to take unprecedented action to keep our communities safe.”

The 1st bus of migrants has arrived in NYC.

Biden refuses to do his job, so Texas continues to take unprecedented action to secure our border.

NYC is the ideal destination for these migrants.

They can receive the services Mayor Adams has boasted about w/in the sanctuary city. pic.twitter.com/4sw41RqKdx

“In addition to Washington, D.C., New York City is the ideal destination for these migrants, who can receive the abundance of city services and housing that Mayor Eric Adams has boasted about within the sanctuary city,” said Abbot.

“I hope he follows through on his promise of welcoming all migrants with open arms so that our overrun and overwhelmed border towns can find relief,” said the Texas Republican.

The arrival of migrants in sanctuary cities sparked backlash from Adams and D.C. Mayor Muriel Bowser.

Adams tweeted on Aug. 7, “@GregAbbot_TX used innocent people as political pawns to manufacture a crisis. New Yorkers are stepping up to fix it — that’s our city’s values. But we need the federal government’s help – money, technical assistance and more.”

.@GregAbbott_TX used innocent people as political pawns to manufacture a crisis. New Yorkers are stepping up to fix it — that’s our city’s values.

But we need the federal government’s help — money, technical assistance and more. pic.twitter.com/cOdXrULpcC

“This is a real burden on New Yorkers as we’re trying to do the right thing,” he said, “We already have an overburdened shelter system.”

“We need help.” Adams said. The mayor petitioned the federal government – the entity responsible for securing America’s borders -- for aid to support the influx of immigrants.

“If we do not get these urgently needed resources, we may struggle to provide the proper level of support our clients deserve, while also facing challenges as we serve both a rapidly growing shelter population and new clients who are seeking asylum,” said Adams.

“We are calling on the federal government to partner with New York City as we help asylum seekers navigate this process, and to provide financial and technical resources,” he added.

Gov. Abbot replied to the mayor in a tweet: “New York City mayor says this is ‘horrific.’ Did he say it was ‘horrific’ when Biden flew plane loads into New York? Nope! Horrific is Biden’s policy of letting in ~2 million illegal immigrants. The NY mayor has no idea how horrific it really is.”

Did he say it was "horrific" when Biden flew plane loads into New York? Nope!

Horrific is Biden's policy of letting in ~ 2 million illegal immigrants.

The NY mayor has no idea how horrific it really is.https://t.co/hZFkYVbKP2

During CBS’ Face the Nation on Sunday, D.C. Mayor Bowser called the influx of immigrants into D.C. a “significant issue” for the city.

“Well, this is a significant issue,” she said. “We have for sure called on the federal government to work across state lines to prevent people from really being tricked into getting on buses. We think they’re largely asylum seekers who are going to final destinations that are not Washington, D.C.”

White House Press Secretary Karine Jean-Pierre also commented, stating, “Well, the question is to Gov. Abbot, why is he using migrants as a political pawn in doing what he’s doing? There’s a legal process here, and he’s not using that legal process.”

On Jesse Watters Primetime, Aug. 4, Gov. Abbot called out these officials for not realizing the chaos of the crisis currently happening at the border.

“Public officials across the country, they do need to realize the magnitude of the chaos created by Biden’s open border policies,” said Abbot.  “They're up in arms about a few thousand people coming into their communities over the past few months. Listen, in any one sector in the state of Texas, we have more than 5,000 people come across that sector every single day.”

“And so, listen, we're full in the state of Texas,” he said. “Our communities are overrun, and I started bussing people to Washington, D.C., when local officials could not handle the number of people that had come across our border.”

“And it's time that these officials in New York, and I'm glad you mentioned The New York Times, they haven't reported about this,” said Abbot. “They haven't written about the chaos at the border. Maybe, finally, The New York Times will also start talking about the chaos at the border caused by the Biden administration's change of all the measures that were put in place by President Trump, where President Trump actually did secure the border.”