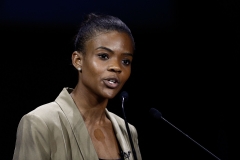 Owens argued that these illegal immigrants would be the new recipients of government-provided, taxpayer-funded goods and services.

They're going to implement the same plan they have executed successfully on Black America for the last six decades. What comes next for these illegal immigrants? Free stuff! Free. Free. Free. Free health care, Tucker. Free hotel rooms. More free stuff to make sure that I, the Democrat that I want you to vote for forever, stays in power.

Below is a transcript of this portion of ‘Tucker Carlson Tonight:’

Tucker Carlson: When you change the population of a country, you change the balance of political power and that has particular consequences for African Americans. Nobody wants to talk about this but it is actually a topic of conversation in some black media. Huge numbers of migrants keep wages low, those migrants compete directly with black workers. But again, the question of political power arises. Just look at how important the Hispanic vote is compared to the black vote in certain swing states. This is an accelerating trend and at a certain point maybe not so distant in the future, black political power will be gone. Candance Owens has thought a lot about this; she’s one of the few people that talks about it openly. She’s the host of "Candace" and we're happy to have her on tonight -- Candance Owens, thanks so much for coming on. So if you’re -- I don’t know -- Sheila Jackson Lee and you call yourself an African American leader and you’re encouraging millions of foreign nationals to come to the country, you’re basically reducing your own power and the power of your voters, I mean, like over the next ten years - soon. Why does no one mention this?

Candace Owens: Oh I mentioned it for the last four years. I sounded like a broken record. I’ve been warning Black America: this is what was going to happen if the Democrats assumed power, that our vote was not even going to become a topic of debate much longer because they would flood in illegal immigrants. And that’s exactly what they're doing, Tucker and it’s sad to see. I mean, I didn’t have a crystal ball and I will say this -- let’s stop calling it a border crisis. I was able to predict this because this is a border plan. This is what the Democrats want to happen. This is why they're not answering any of the questions that you have tonight because they want to import these illegals. They see them as their next victim voters; what I mean when I say "victim voters" is that they're going to implement the same plan they have executed successfully on Black America for the last six decades. What comes next for these illegal immigrants? Free stuff! Free. Free. Free. Free health care, Tucker. Free hotel rooms. More free stuff to make sure that I, the Democrat that I want you to vote for forever, stays in power. Vote for me and I’ll give you more free stuff and it will keep going on and on like this until they wake up and realize that their lives are not getting better. Black Americans are just about starting to wake up to conservative principles and realizing that their lives have not gotten better under Democrats, under Democrat policies. And what happens? Well, it doesn't matter anymore, Tucker, because now they're importing a new block of voters and those voters are Hispanic illegal immigrants that are coming over the border.